A renowned Catholic exorcist will hold Masses for Supreme Court Justice Brett Kavanaugh to counter curses cast on him by a coven of witches.

Rev. Gary Thomas, whose training as an exorcist was chronicled in the book “The Rite: The Making Of A Modern Exorcist,” announced that he will offer Masses for Kavanaugh on Thursday and Saturday to combat the “Ritual to Hex Brett Kavanaugh” hosted by an occult bookshop in New York on Oct. 20. Thomas said he and other exorcists in the Catholic Church were “appalled” at the public announcement of the curse, which he characterized as “a conjuring of evil” and a sign that satanic forces are growing more brazen.

“The decision to do this against a Supreme Court justice is a heinous act and says a lot about the character of these people that should not be underestimated or dismissed,” Thomas told National Catholic Register (NCR). “These are real evil people.” 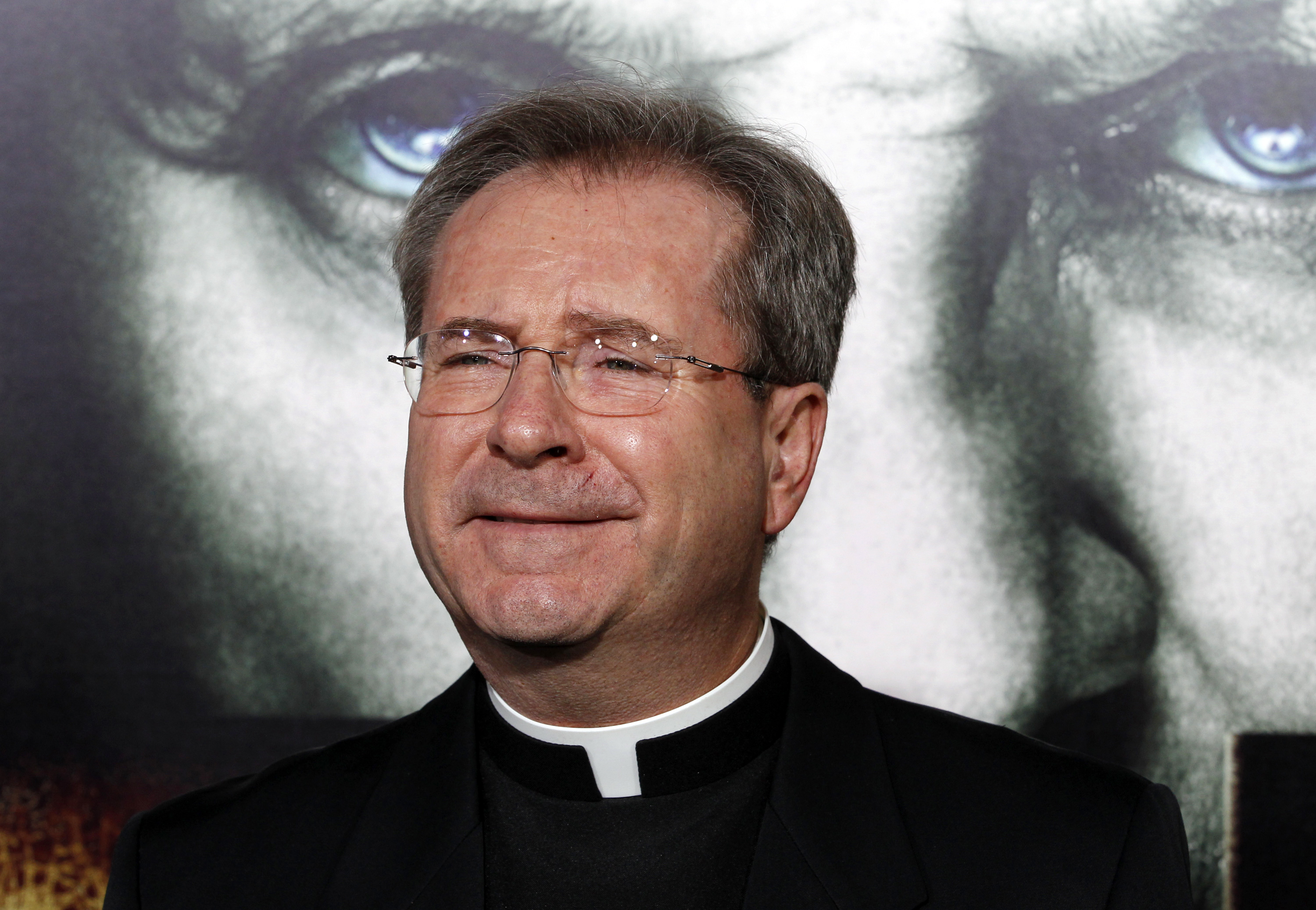 Father Gary Thomas of Sacred Heart Parish in Saratoga, California, a Vatican-trained exorcist and advisor on the film “The Rite”, poses at the film’s premiere in Hollywood, California January 26, 2011. REUTERS/Fred Prouser

Catland, the occult bookshop in Brooklyn hosting the hexing ritual with a group of self-proclaimed “Antifa Witches,” advertised the event on Facebook and offered tickets on Eventbrite, which quickly sold out.

“Please join us for a public hex on Brett Kavanaugh, upon all rapists and the patriarchy at large which emboldens, rewards and protects them. We are embracing witchcraft’s true roots as the magik of the poor, the downtrodden and disenfranchised and it’s history as often the only weapon, the only means of exacting justice available to those of us who have been wronged by men just like him,” Catland advertised on the event page. 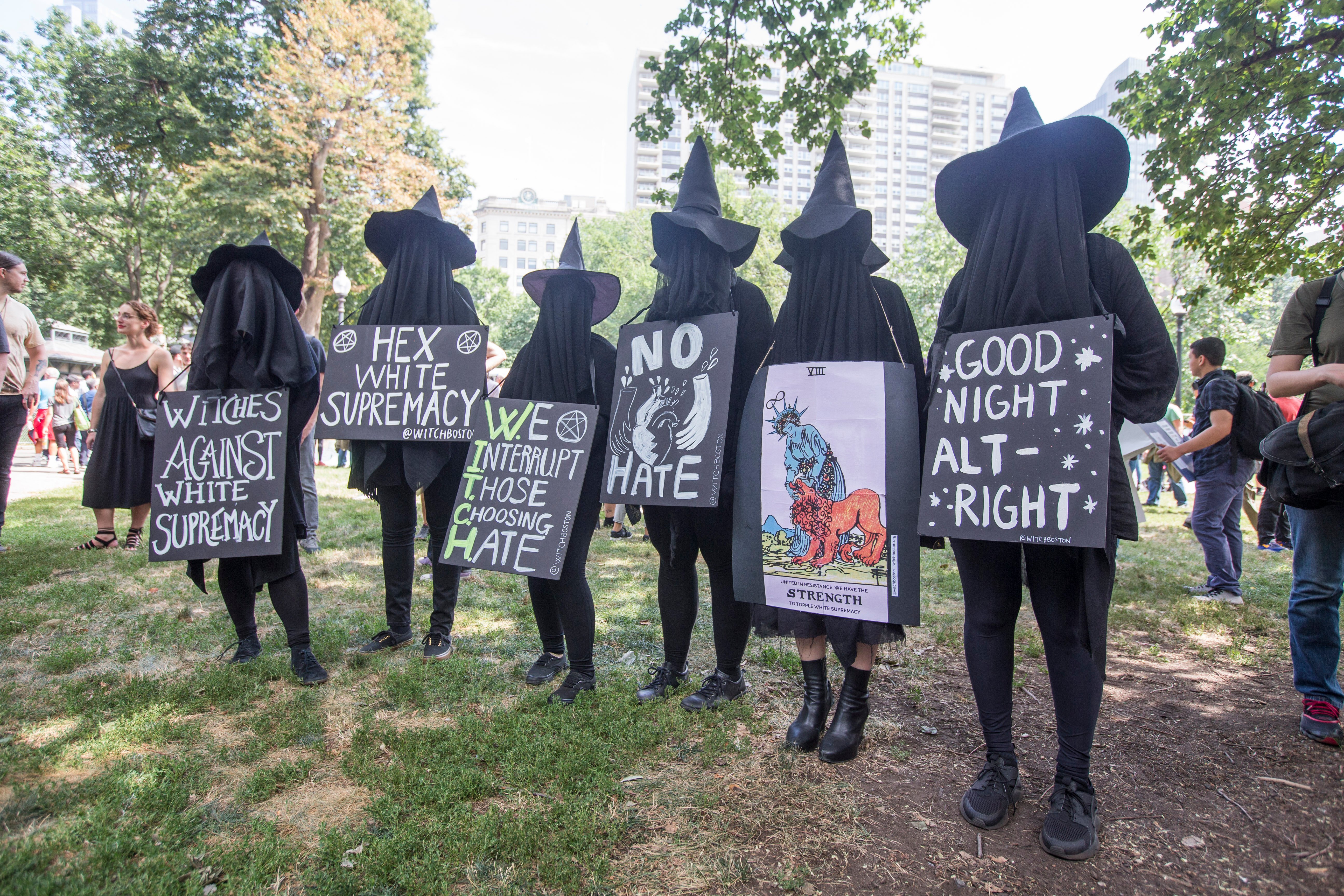 Counter protesters in witch costumes hold up signs after a march to the ‘Free Speech Rally’ on Boston Common on August 19, 2017 in Boston, Massachusetts. Thousands of demonstrators and counter-protestors are expected at Boston Common where the Boston Free Speech Rally is being held. (Photo by Scott Eisen/Getty Images)

Catland also clarified that while Kavanaugh will be the main focus of the hex, curses will also be directed at “all rapists and the patriarchy at large.” The bookstore encouraged attendees to “bring your rage and and all of the axes you’ve got to grind.” Attendees will also perform a second ritual, in addition to the hex, known as “The Rites of the Scorned One” in order to “validate, affirm, uphold and support those of us who have been wronged and who refuse to be silent any longer.”

The hex ritual will allegedly involve coffin nails, soil from a cemetery, and effigies. The organizers said that 25 percent of the event’s proceeds will be donated to Planned Parenthood while another 25 percent will be donated to the Ali Forney Center, which advocates for homeless LGBT youths. The event sold out so quickly and was so popular on Facebook that Catland also organized a second hex ritual set for Nov. 3.

While some may scoff at the idea of modern-day witches and curses, Thomas insisted that the spiritual consequences, and potential physical effects, of engaging in witchcraft are very real.

“I’m appalled” he said. “I sent this to a load of exorcists yesterday and their reaction was similar to mine. That shows this is not something that is make believe.”

Thomas lambasted the occult group, saying that their intent to harm Kavanaugh had more to do with evil than with fighting for freedom.

“This is a conjuring of evil—not about free speech. Conjuring up personified evil does not fall under free speech. Satanic cults often commit crimes; they murder, and sexually abuse everyone in their cult,” Thomas said of occult groups who practiced black magic throughout history.

“Basically, it’s all about causing suffering,” she said, according to Newsweek. “And we intend to make Kavanaugh suffer.”

Many Christian ministers assert, however, that the redemptive power of Jesus’ sacrifice and resurrection is more than powerful enough to nullify any intended curse. 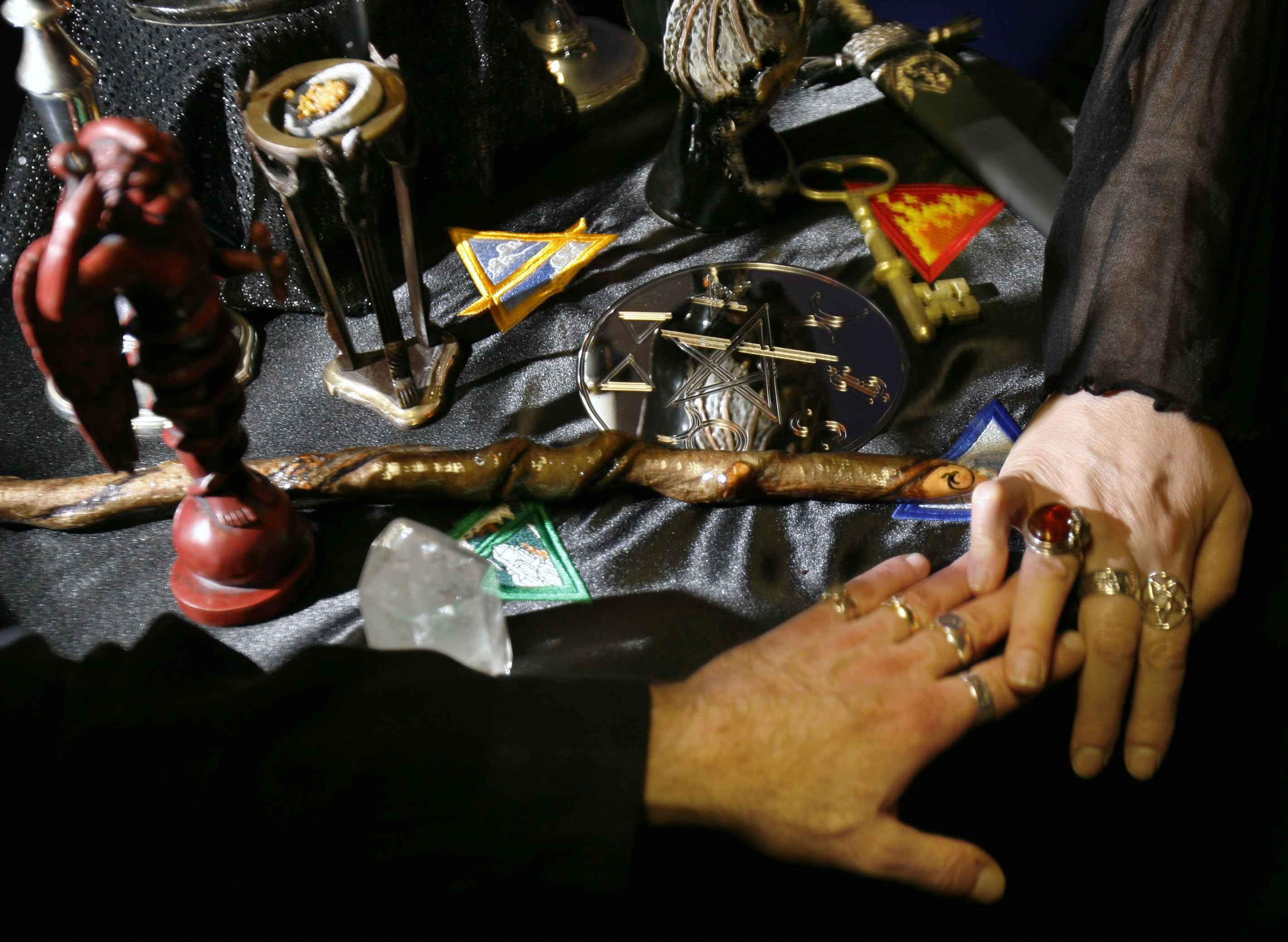 High priestess and priest Richard (L) and Gypsy Ravish hold hands at an altar dedicated to “magick and the return of the old ways” at their store Nu Aeon in Salem, Massachusetts October 25, 2006. Witches of Salem will celebrate the Wiccan new year of Samhain on October 31. REUTERS/Brian Snyder

Thomas clarified that the curse will likely be ineffective against anyone in a state of grace, which is to say anyone who has been forgiven of sin and eternally redeemed by God.

Other Christians have also joined Thomas in spiritual intercession on behalf of Kavanaugh, praying and fasting not only for the Justice, but also asking God’s mercy for those who are participating in the hex.

The manager of a Catholic apostolate told NCR she is praying that “God will have mercy on those involved, that He will give everyone the grace of faith and repentance, and that He will grant spiritual protection to Brett Kavanaugh.”

Christians are not the only ones to express opposition and take up spiritual arms against the curse. Even fellow neo-pagans have criticized the hex as immoral and potentially dangerous, citing the Wiccan “Rule of Three,” a law of reciprocity that states that whatever energy one sends out to others will be revisited upon them threefold, be it positive or negative. The rule is a matter of debate among Wiccans as some of whom do not adhere to the rule, though they all adhere to the Wiccan rede, which states: “Eight words the Wiccan Rede fulfill, An it harm none do what ye will.” 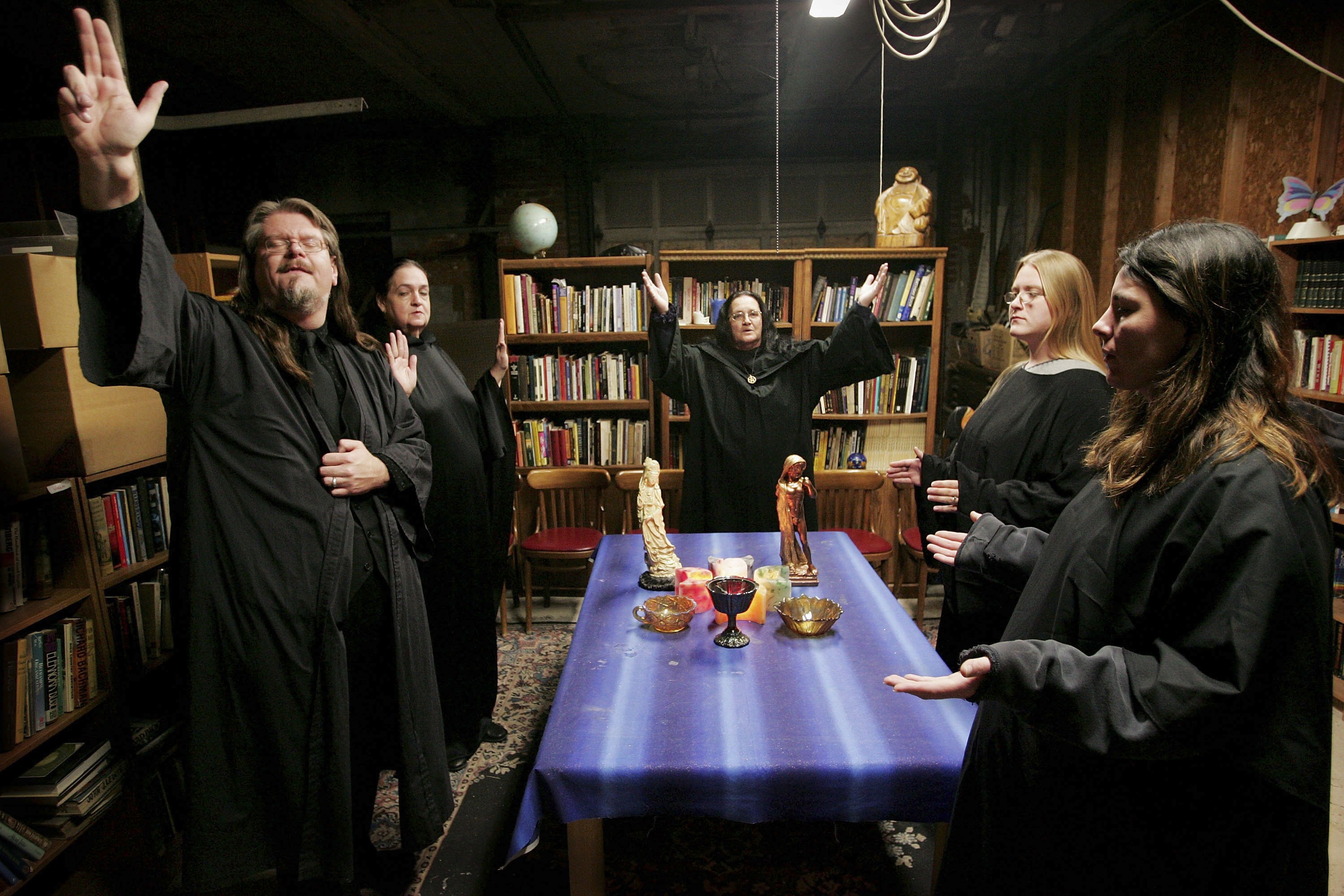 Wicca religion practitioners (L-R) Rev. Don Lewis, Rev. Krystal High-Correll, and Rev. Virgina Powell HPS and student Ashleigh Powell and Cathy Smith participate in a Wiccan Lunar ritual in the temple at the Witch School October 25, 2006 in Hoopeston, Illinois. Wicca is a neo-Pagan religion which uses magic and nature in its teachings. The school, which opened in 2003, offers courses in Wicca theology, hosts seminars and Wiccan rituals at the campus. (Photo by Scott Olson/Getty Images)

Wiccan beliefs concerning blessing and curses are a moot point, however, for those who identify as “traditional witches,” and evidently “Antifa Witches,” who have no qualms about engaging in black magic as a means of vengeance.

“It strikes fear into the heart of Christian fundamentalists,” Bracciale said, according to Broadly. “That’s one of the reasons that we do it. Sometimes you have to fight fire with fire. We don’t subscribe to this bullshit, pacifist, love and light, everybody just get along thing. If you want to hijack the country; if you want to steal the election; if you want to overturn Roe v. Wade; if you want to harm people who are queer; well guess what: We’re not doing civility.”