Tropical Storm Michael bulldozed Georgia’s agricultural industry after the storm rolled through the state after making landfall in Florida as a Category 4 hurricane.

Estimates show farmers lost $2.8 billion in crops after the massive storm rolled through, The Georgia Department of Agriculture said Wednesday. The value of Georgia’s agriculture products in 2016 was $13.75 billion, according to the Center for Agribusiness & Economic Development.

Georgia’s farmers were devastated. “It’s painful to see all these years of work, in six hours’ matter of time taken away from me,” Tom Windhausen, a farmer in the aptly named Cotton, Georgia, told reporters. Cotton losses could approach $800 million.

Georgia also experienced major losses to other major staples, such as pecan and peanut crops as well as to vegetables such as sweet corn. The state’s poultry industry also took a hit – Michael killed more than 2 million chickens, the agriculture department said.

Farmers were preparing for the worst since before the storm, which blew into Florida Oct. 10 with sustained wind gusts of 155 mph before weakening. (RELATED: Rick Scott Issues Dire Warning Ahead Of Hurricane Michael) 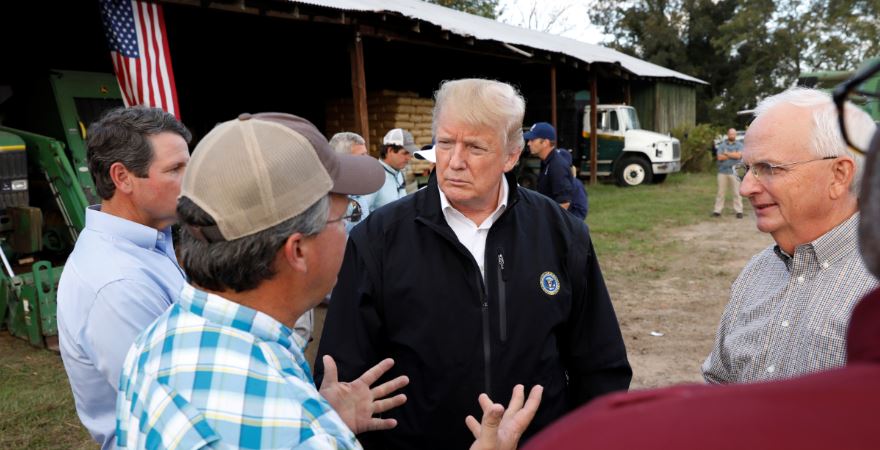 President Donald Trump tried to reassure Georgian farmers during a recent visit tot he affected areas. “We’re working on it. You know that, right?” he said on Monday. “It’s too bad, what happened to you guys,” he said to the farmers.

“For Georgia, we are best with pine trees, pecans, and peanuts,” Andy Lucas, director of communications, told The Daily Caller News Foundation before Michael’s arrival. “Any time there is wind or rain or hurricanes, officials in the state get concerned. We are monitoring things. Cotton could also be affected.”

“Peanuts are 40 percent complete,” he said before noting that 60 percent of the crop is yet to be pulled as Michael bears down. “They could rot, and the grades could go down as well. We haven’t even begun to harvest pecans yet.” October and November are the harvest season for Georgia’s pecans and peanuts.

“We are almost to the end of the season – then Mother Nature comes in and disrupts everything. They are pretty depressed,” Lucas said of farmers forced to deal with what could be ravaged crops.

1
Mitt Romney Booed At CPAC
US
2
This Pocket Chainsaw Is So Effective, Even The U.S. Military Uses It
Daily Dealer
3
Melania Turns Heads In Gorgeous Sleeveless Black Dress At WH Reception
Editorial
4
Why Have The American People Decided To Throw Out Their Political Leaders And Start Over?
Politics
5
OLIVER: Bye, Bye, Bill Kristol
Opinion