Mattis sat down with Chinese Defense Minister Wei Fenghe for an hour and a half Thursday to ease tensions between the U.S. and China, even inviting Wei to the states for further talks, the NYT reports.

Mattis has assured that the U.S. and China will “sort this out,” but military disputes in the South China Sea marred meetings between the two defense secretaries earlier in Mattis’s current trip to Asia, according to Reuters, and are becoming increasingly frequent and confrontational.

Reports of Mattis’s re-scheduled meeting, which was canceled Sept. 30, with Wei coincide with a Thursday report that American B-52 bombers passed over the contested waters of the South China Sea Tuesday. 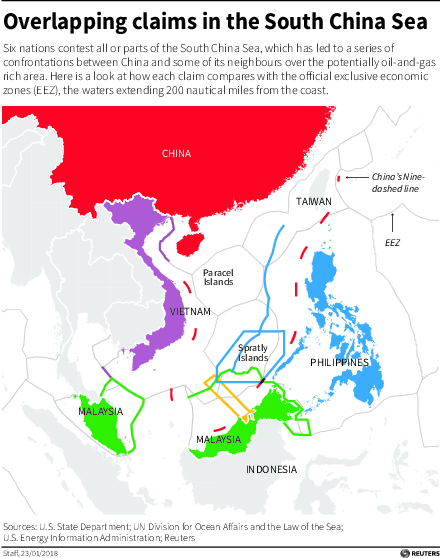 Two B-52 Stratofortress bombers “participated in a routine training mission in the vicinity of the South China Sea” flying from Guam over Chinese occupied islands in the South China Sea’s international waters Tuesday, according to Air Force officials.

China called the last flight of two U.S. bombers over the region in September “provocative,” according to the Associated Press, and a challenge to “China’s sovereignty,” when addressing an American plane that flew over the region in early September.

Pentagon officials did not offer any specific information on the planes’ flight path. B-52 bombers typically fly from Anderson Airbase on Guam, over the South China Sea, to Diego Garcia, an island with a U.S. air base in the Indian Ocean, according to the New York Times.

One such American mission in the area gained international attention when a Chinese destroyer appeared to attempt to ram the USS Decatur, an American destroyer, while it was in the region. While Mattis tries to smooth over rough relations with China, the military is not backing down.

“What we don’t want to do is reward aggressive behavior like you saw with the Decatur incident by modifying our behavior,” Deputy Assistant Secretary of Defense for South and Southeast Asia Joe Felter told CNN, Thursday.