Superstar singer Rihanna reportedly declined an invitation to headline the 2019 Super Bowl halftime show this week citing a desire to support former NFL quarterback Colin Kaepernick as her reason for turning it down.

“The NFL and CBS really wanted Rihanna to be next year’s performer in Atlanta,” an unnamed source told U.S. Weekly. “They offered it to her, but she said no because of the kneeling controversy. She doesn’t agree with the NFL’s stance.” 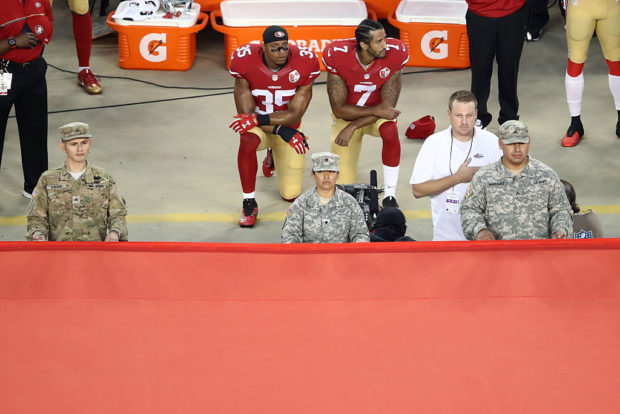 SANTA CLARA, CA – SEPTEMBER 12: Colin Kaepernick #7 and Eric Reid #35 of the San Francisco 49ers kneel in protest during the national anthem prior to playing the Los Angeles Rams. (Photo by Ezra Shaw/Getty Images)

Kaepernick infamously sat during the national anthem during the preseason of the 2016 NFL season. That lasted only a short time, and then he began taking a knee instead. Many players followed suit. (RELATED: Exclusive: Trump Critical, But Says Nike’s Kaepernick Deal ‘Is What This Country Is All About)

Kaepernick opted out of a contract at the end of the 2016-17 NFL season and remains unsigned after sitting out all of last season.

The Super Bowl halftime show will be performed by Maroon 5, and US Weekly reports that there is a possibility Cardi B could be a special guest. The game itself will be played in Atlanta’s Mercedes-Benz Stadium.