CNN correspondent Bill Weir was reporting from the border between Guatemala and Mexico, following a caravan of migrants approaching Mexico, when he and others were hit with tear gas on Friday afternoon.

“We’re on a bridge that separates Guatemala from the southern tip of Mexico here. There’s about 400 riot policemen, Federales, on the Mexican side behind a twenty-foot steel fence that has been padlocked shut and for some reason, the authorities on the Guatemalan side, let this huge surge of humanity in,” Weir said. “They all came streaming up to the fence. At first, they tried to form a single-form line because they were told they’d be let in one at a time in a humane, orderly way. But the crowd was just too powerful.”

“They were greeted by the cops. The policemen are now forcing the gates back shut after firing either smoke canisters — I didn’t smell tear gas,” he continued. “Now people have backed off, there’s a little more space and you can see all the shoes that have been lost in the scramble. There’s a man in front of me suffering from heat stroke, maybe having a heart attack.” 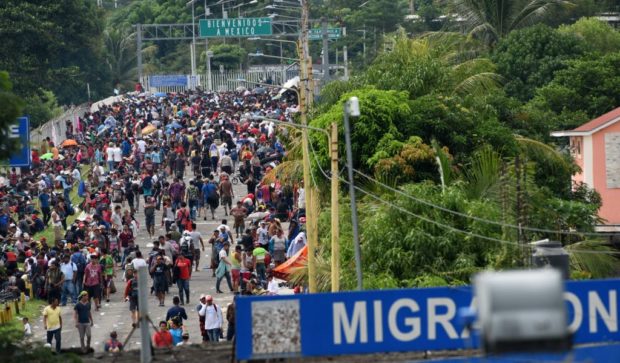 Honduran migrants taking part in a caravan heading to the US, arrive at the border crossing point with Mexico, in Ciudad Tecun Uman, Guatemala on October 19, 2018. – (Photo by ORLANDO SIERRA / AFP / Getty Images)

Earlier this week, President Trump threatened to close the southern border and halt aid. (RELATED: Trump Threatens To Close Southern Border, Halt Aid In An Effort To Stop Central American Migrant Caravan From Crossing Into Us)

“This is really just an exercise in crowd control we’re witnessing here. Imagine if they threw open the gates to a concert, as we’ve learned that lesson in years past and people are trampled,” Weir added. “That’s what happened when they opened up the Guatemalan side. Oh, tear gas. Tear gas. The canister landed literally two feet from me. No, no, no, no, don’t throw rocks!”