Court documents released last Friday showed evidence the Obama administration’s now-defunct operation known as Operation Choke Point had top government officials struggling to find the legal basis to persuade banks to terminate their relationships with businesses that had not committed any crimes.

The never-before-seen document release happened as a result of a summary judgment from a lawsuit filed more than four years ago spearheaded by payday lender Advance America and other industry allies against the Federal Deposit Insurance Corporation (FDIC), Office of the Comptroller of the Currency (OCC) and other federal regulators.

The effort was known as Operation Choke Point, where Obama administration regulators tried to limit access to banking services for businesses it considered “high-risk,” like payday lenders. Emails show that FDIC administration officials struggled to figure out how to explain to banks why their institutions should be terminating their relationships with businesses that have not committed any fraud or other illegal activities.

Below is an email from Marguerite Sagatelian, a top lawyer at the FDIC’s Consumer Enforcement Unit, to James L. Anderson, another FDIC lawyer, illustrating this conflict:

I just got off a lengthy conference call with Dianne and Pat (as well as Greg and John Bowman, the review examiner) regarding [REDACTED]. Dianne is concerned that we are putting a lot of resources into this case and that, unless we can show fraud or other misconduct by the payday lenders, we will not be able to hold the bank responsible.

After much discussion, we agreed to:  complete our review of bank emails;  review the risk management exam report and draft consent order regarding BSA violations; and find out more about the US Attorney’s investigation (that office obtained copies of the bank’s emails right after we did). Once that is done, we will reevaluate our game plan.

One email between FDIC officials discussed the issue of including pornography in the messaging about payday lending and whether it crossed the line that regulators were making moral judgments as opposed to legal judgments.

Below, FDIC official Jonathan Miller appeared concerned that FDIC Chairman Martin Gruenberg’s letters to Congress always talked about pornography when discussing payday lending in an effort to convey a “good picture regarding the unsavory nature of the businesses at issue.”

The email was sent by an attorney in the FDIC’s Legal Division and describes a meeting that happened with the Deputy Director:

I just got a call from Jonathan Miller regarding why we kept taking pornography out of their write up.

I explained that we felt there was a difference between on-line gambling and payday lending (which are illegal in some states) and pornography (which may be immoral, but which is not per se illegal). I noted that we didn’t want to seem like we as a regulator were making moral judgments regarding the types of businesses with which our institutions deal.

Rather, we wanted to make it clear that were making rational safety and soundness decisions by discouraging our institutions from engaging in or facilitating illegal transactions.

Jonathan heard where we were coming from, but nonetheless wants to retain a reference to pornography in our letters / talking points. He thinks it’s important for Congress to get a good picture regarding the unsavory nature of the businesses at issue. He repeated that “one is judged by the friends one keeps,” and he seems to feel strongly that including payday lenders in the same circle as pornographers and on-line gambling businesses will ultimately help with the messaging on this issue.

Another email exchange released within the court documents is between two unknown FDIC officials trying to figure out how pornography had anything to do with payday lending. One asks, “Payday lending makes pornography look bad?” The other responds in part that the he/she does not have a legal argument to make “(I don’t think) but I agree that tying payday lending to pornography is a bit moralistic to me. Payday lending may be illegal [sic] some places, it is legal IN ABOUT 35 STATES!!!” 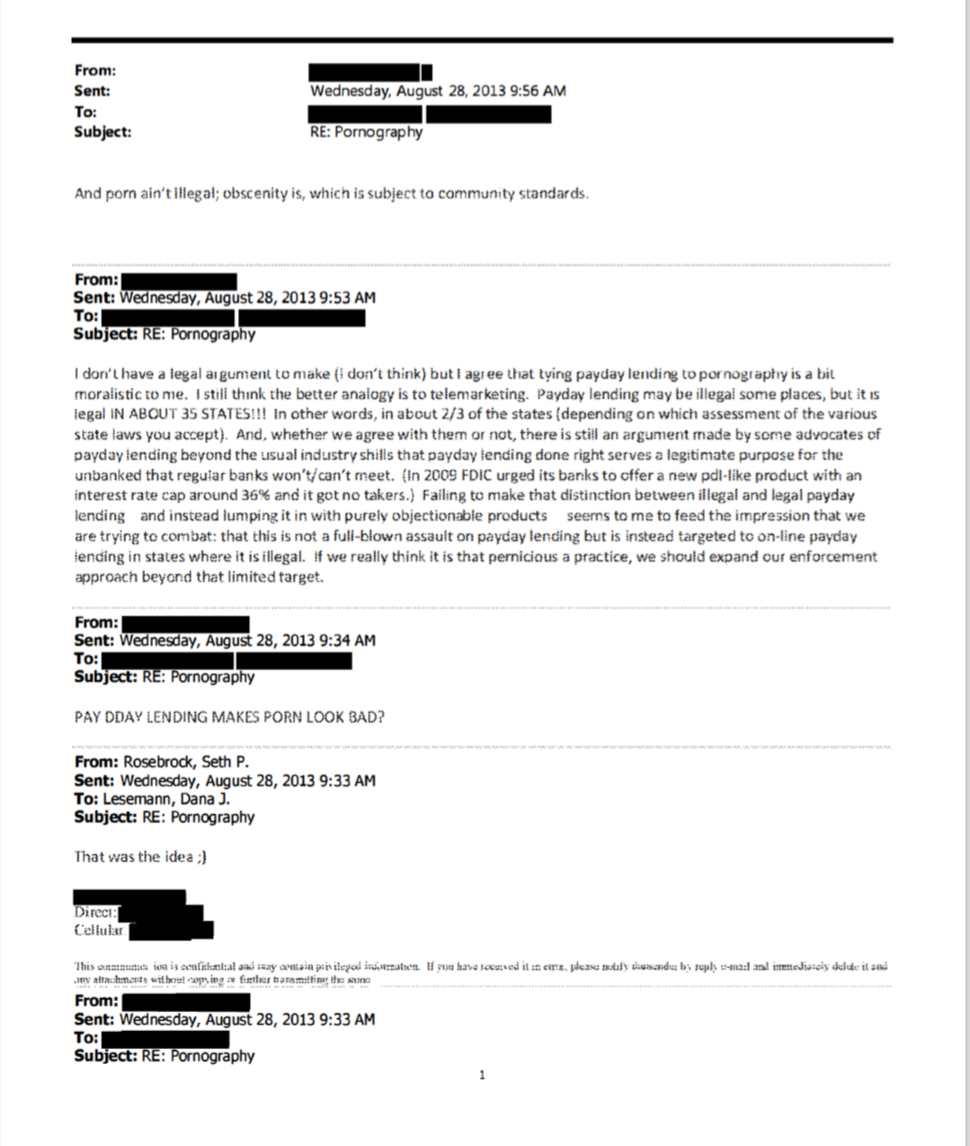 Atlanta Regional FDIC Director Thomas Dujenski not only told members of his staff that “[a]ny banks even remotely involved in payday [lending] should be promptly brought to my attention” — he repeatedly pressured banks into terminating payday lender clients. In one situation, he met face-to-face with the chairman of a bank that serviced payday lenders and described payday lending as a “dirty business,” threatening the chairman with potential criminal prosecution if he did not cease the relationship. 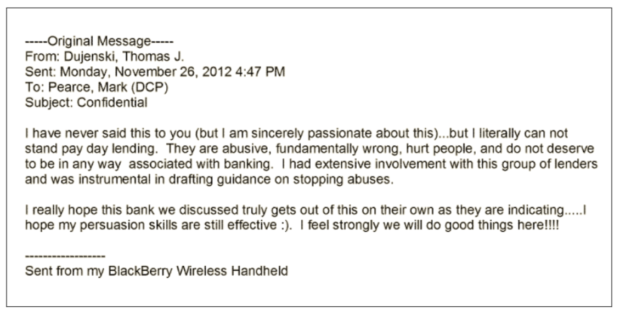 Even after the bank complied and terminated the account, Dujenski covered up the FDIC’s involvement by making it seem like the bank characterized the decision as its own. He also reported back to Washington, “I think we got our message across.”

Dujenski denied in his deposition to the court that he targeted any business in particular.

Chicago FDIC Regional Director Anthony Lowe also threatened banks into terminating relationships with the payday lending industry. In a letter to one bank, he stated that it was “unacceptable” for the bank to continue serving payday lenders.

He also told his staff to use all “available means, including verbal recommendations, to strongly encourage [supervised banks] to refrain from any activities that provide assistance to the business activities of [payday] lenders.”

In another letter, Director Lowe explained to a bank’s board of directors that it was the FDIC’s “view that payday loans are costly and offer limited utility for consumers, as compared to traditional loan products. Furthermore, the … relationship carries a high degree of risk to the institution … Consequently, we have generally found that activities related to payday lending are unacceptable for an insured depository institution.”

In Lowe’s deposition to the court, according to court records, he testified that the “backlash against the FDIC’s targeting of Payday made him feel scapegoated, when in fact, he was just following the FDIC’s concerted policy.”

Lowe also testified that in late 2010 or early 2011 that the FDIC’s senior Washington officials met with all regional directors (or their designees) when a high-level FDIC official distributed the agency’s message direct from the FDIC’s top leadership in Washington: “If a bank was found to be involved in payday lending, someone was going to be fired.” Following that meeting, the termination of the FDIC’s targeted “high-risk merchants” began. 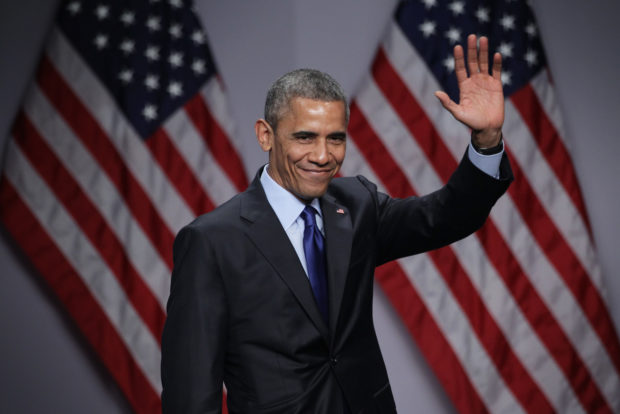 Documents revealed from the staff report at the 2014 House Oversight and Government Reform Committee showed the FDIC equated lawful and regulated activities like firearms sales, ammunition sales, payday lenders, money transfer networks, coin dealers and tobacco sales to harmful or explicitly illegal activities. The FDIC used such comparisons in its policy guidance as an implicit threat for federal investigations.

Essentially, the MOU’s would describe loans to firearms dealers as “undesirable” while subjecting firearms and ammunition merchants to significantly higher due diligence standards.

The FDIC would even go as far as equating firearms and ammunition dealers as being considered a higher risk of being associated with “terrorism and terrorist acts.”

In its report, the House Oversight Committee stated, “Operation Choke Point is being executed through subpoenas issued under Section 951 of the Financial Institutions Reform, Recovery, and Enforcement Act of 1989. The intent of Section 951 was to give the Department the tools to pursue civil penalties against entities that commit fraud against banks, not private companies doing legal business.”

A press release from then House Oversight Committee Republican Chairman Darrell Issa said, “Operation Choke Point is the Justice Department’s newest abuse of power. If the administration believes some businesses should be out of business, they should prosecute them before a judge and jury. By forcibly conscripting banks to do their bidding, the Justice Department has avoided any review and any check on their power.”

In an August 2017 letter, the Trump Justice Department confirmed to House Judiciary Chairman that Operation Choke Point was a “misguided initiative conducted during the previous administration. We share your view that law abiding businesses should not be targeted simply for operating an industry that a particular administration may disfavor.”

Although Operation Choke Point is said to be no longer running, the culture it created continues, say the plaintiffs in the lawsuit, who are seeking “end to this type of improper regulatory pressure — which is causing bank terminations to continue to this day — as well as an opportunity to restore the banking relationships that were previously terminated as a result of Operation Choke Point.”