President Trump said that he has more Native American ancestry than Senator Elizabeth Warren during his rally in Mesa, Arizona on Friday night.

The Boston Globe originally claimed on Monday that the DNA test revealed Warren was somewhere between 1/32 and 1/512 Native American, however they then corrected their story saying the numbers are actually between 1/64 and 1/1,024. (RELATED: Boston Globe Correction Casts Doubt On Liz Warren’s Ancestry Claims)

Her decision to take and release the results of a DNA test stem from the president naming her “Pocahontas,” for saying she was Native American during times in her life.

“You know we can no longer say Pocahontas because she has no Indian blood. We can no longer call her Pocahontas, I don’t know what I’m going to do. We’ll have to come up with another name for her. Elizabeth Warren, a very boring name. We’re going to have to come up with another name,” Trump began. (RELATED: Trump Taunts Warren’s ‘Bogus’ DNA Test Results) 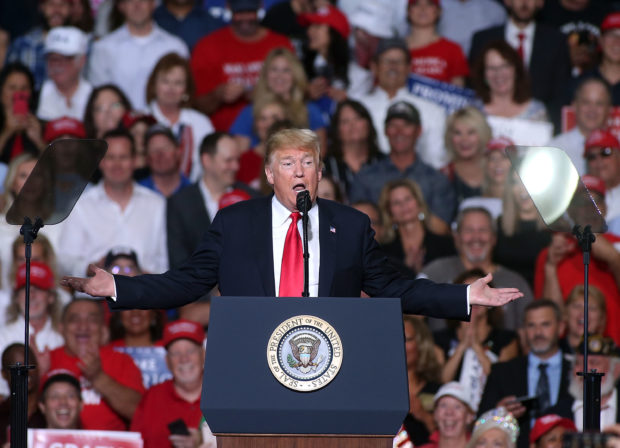 MESA, AZ – OCTOBER 19: President Donald Trump speaks to a crowd of supporters during a rally at the International Air Response facility on October 19, 2018 in Mesa, Arizona. (Photo by Ralph Freso/Getty Images)

“I can’t use the word Pocahontas anymore. There’s no Indian blood. I always said, ‘I have more Indian blood than she has, and I have none. I have none, and it’s more than she has. I don’t know we’ll have to come up with another name,” the president continued.