Amy Schumer, through her pal Jessica Yellin, announced Monday that she and husband Chris Fischer are expecting their first child.

The news broke on Yellin of “News Not Noise” Instagram account with a list of Schumer’s recommendations for Democratic congressional and gubernatorial candidates, according to People magazine. (RELATED: TRAINWRECK–Tampa Crowd Eats Amy Schumer Alive For Going After Trump [VIDEO]) 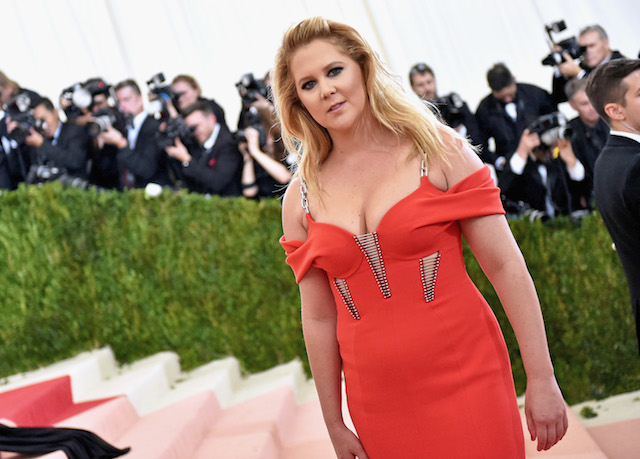 Amy Schumer attends the “Manus x Machina: Fashion In An Age Of Technology” Costume Institute Gala at Metropolitan Museum of Art on May 2, 2016 in New York City. (Photo by Mike Coppola/Getty Images for People.com)

“I wanted to share some news from our community, maybe it’s noise but it’s happy noise,” Yellin shared. “So I’m not in the business of making voting recommendations, but these are the recommendations of Amy Schumer, one of the most consistent and earliest supporters of News Not Noise. Now read all the way to the bottom, you’ll see there’s some news down there. Congratulations, Amy.”

At the bottom of the list, it read, “I’m pregnant-Amy Schumer.”

A short time later, the 37-year-old comedian posted a photoshopped a picture on her social media account replacing Prince Harry and Meghan Markle’s faces with her and Fisher’s photo. As previously reported, Markle announced last week that she was expecting her first child.

The caption next to the post read, “About to announce some exciting news on @jessicayellin insta page. Please follow her for up to the minute #newsnotnoise she breaks down what’s really going on. She agreed to post a lil noise today for me! Follow her and VOTE!!”

Schumer and Fisher tied the knot in a private ceremony in February in Malibu, California, earlier this year, after dating since November of last year. Shortly, after news broke about their wedding the actress addressed any speculation that they had gotten married due to her possibly being pregnant.

“No I am not pregnant,” Schumer wrote on her post on social media at the time.