An unofficial student group at Georgetown University called “H*yas for Choice” has selected the winning design for the envelope from which they will be dispensing free condoms. 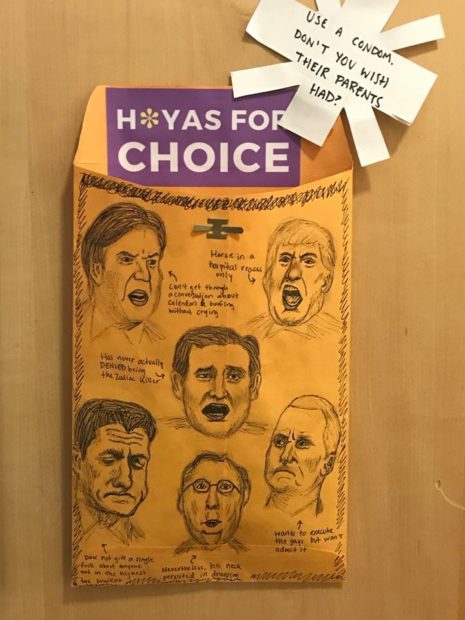 “Use a condom. Don’t you wish their parents had?” reads a label over the makeshift condom dispensary. Beneath are unflattering sketches of Republican leaders, complete with uncomplimentary captions.

From top left, the caricatures on the envelope depict Justice Brett Kavanaugh (“Can’t get through a conversation about calendars & boofing without crying”), President Donald Trump (“Horse in a hospital only [illegible]”), Vice President Mike Pence (“Wants to execute the gays but won’t admit it”), Sen. Mitch McConnell (“Nevertheless, his neck persisted in drooping”), Speaker of the House Paul Ryan (“Does not give a single f*ck about anyone not in the highest tax bracket”), and Sen. Ted Cruz (“Has never actually DENIED being the Zodiac Killer”).

Officially a Catholic university, Georgetown reportedly does not fund or provide benefits to student organizations that violate the teachings of the Church, including those on contraception. Nevertheless, “groups like H*yas for Choice, which have not been able to access the benefits available to recognized clubs because of lack of university recognition, will now be able to access benefits through a GUSA partnership,” according to the school’s newspaper. “Unrecognized groups will be able to use storage space, reserve classrooms and use printing services through the GUSA executive, rather than through direct connection to university services and offices, like recognized student groups.”

In a statement to The Daily Caller, a spokesman for Georgetown said of the organization, “H*yas for Choice is not a student organization with access to university benefits and does not receive funding from the University.” At the time of publication, the student organization had not responded to a request for comment.