Gorbachev and former President Ronald Reagan signed The Intermediate-Range Nuclear Forces (INF) Treaty, which was supposed to eliminate “ground-launched ballistic and cruise missiles with ranges of between 500 and 5,500 kilometers, their launchers and associated support structures and support equipment within three years after the Treaty enters into force,” according to the U.S. Department of State. The treaty was a defining moment in the thawing of U.S.-Soviet relations toward the end of the Cold War. 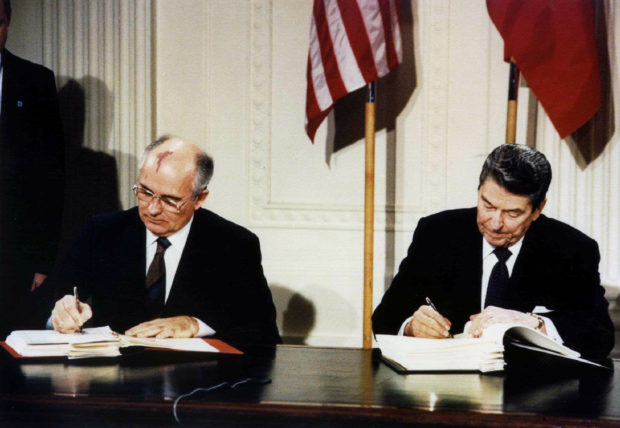 “Do they really not understand in Washington what this can lead to?” Gorbachev asked in his Interfax news agency interview, The New York Times reported.

“All agreements aimed at nuclear disarmament and limiting nuclear weapons must be preserved, for the sake of preserving life on earth,” he said, according to TheNYT.

The administration has argued Russia violated the treaty multiple times and that it therefore no longer serves American interests. U.S. Ambassador to the North Atlantic Treaty Organization (NATO) Kay Bailey Hutchison said Oct. 2 that the U.S. might even conduct a military strike against the banned missiles. (RELATED: Republican Lawmaker Proposes Russian Sanctions)

“But I think the question was what would you do if this continues to a point where we know that they are capable of delivering. And at that point we would then be looking at a capability to take out a missile that could hit any of our countries in Europe and hit America in Alaska,” Hutchison said.

Hutchison later clarified she was “not talking about preemptively striking Russia” in her comments.

I was not talking about preemptively striking Russia. My point: needs to return to INF Treaty compliance or we will need to match its capabilities to protect US & NATO interests. The current situation, with in blatant violation, is untenable. https://t.co/dRaFoK8xlo

Hutchison cited the 9M729 Russian missile system as evidence of Russian violations of the INF Treaty.

Despite Russian violations, some have criticized the move.

“There is no doubt that Russia is responsible for the degradation of the INF treaty. However, withdrawing from this treaty without a comprehensive strategy for addressing its underlying strategic implications and without consulting Congress or our allies threatens long-term United States’ national security interests,” New Jersey Democratic Sen. Bob Menendez, the ranking member on the Senate Foreign Relations Committee, said in a statement, CNN reported.

It was “regrettable” and “it poses difficult questions for us and Europe,” said German Foreign Minister Heiko Maas.

Administration officials and some Republican lawmakers have also stated the INF Treaty with Russia has hamstrung the U.S.’s ability to counter China in the Pacific.

“The INF treaty was rightly viewed as a remarkable achievement by President Reagan when it was ratified over 30 years ago. But today, the Russians are openly cheating, and the Chinese are stockpiling missiles because they’re not bound by it at all. I’ve long called for the U.S. to consider whether this treaty still serves our national interest. If these reports are true, I applaud the administration for recognizing that it’s time to move on,” Arkansas Republican Sen. Tom Cotton said in a statement.