Merkel told lawmakers in early October that her government will co-finance the construction of a $576 million liquefied natural gas shipping terminal, The Wall Street Journal reported Monday. The project had failed for years to gain any traction in a country that receives the bulk of its gas from Russia.

Trump has lobbied intensely for European countries — Germany in particular — to shift their energy imports from Russia to the U.S., if for no other reason than to diversify their energy markets. He told world leaders at a Group of 20 summit in 2017 that the U.S. wants to make it easier for companies to ship natural gas products to Eastern Europe.

German and U.S. officials said Berlin is hoping that forging ahead on the project might help lessen the possibility of Washington leveling sanctions against Nord Stream 2, an unbuilt gas pipeline that would double Russia’s energy exports to Germany.

Some U.S. officials believe the White House’s position would reduce the impact of Russia using energy as a weapon against European countries that stray from Russian President Vladimir Putin’s bidding. Trump also suggested in 2017 that he might wage a protracted battle against the Nord Stream 2.

Merkel asked Trump in 2017 to butt out of Germany’s energy market, but the German leader is now changing her tune. She didn’t describe her change of mind to lawmakers as a defeat but rather a “strategic” decision that could pay off in the long run. 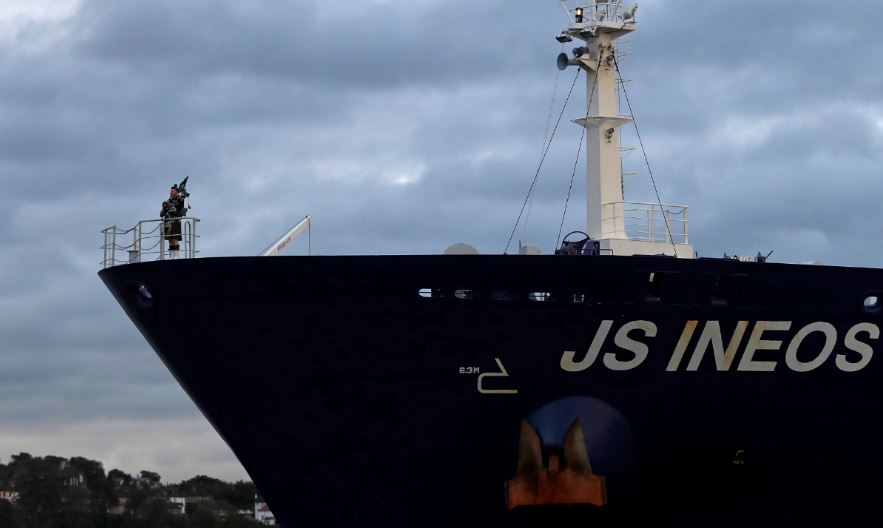 A piper plays as the tanker carrying the first shipment of U.S. shale gas passes under the Forth Bridge as it travels to dock at Grangemouth in Scotland, Britain, on Sept. 27, 2016. REUTERS/Russell Cheyne

Several international companies filed an official bid for state support for a terminal in the northern part of Germany less than a week after Merkel’s comments, the report notes, citing sources familiar with the move. (RELATED: Trump Plans To Undermine Russia’s Hold On Europe Through Natural Gas Exports)

“We need to make this step now, and not just because Mr. Trump is demanding it, but because it’s necessary for our future,” Oliver Grundmann, a lawmaker from Merkel’s conservatives for the Stade constituency, told reporters. “Stade will be a symbol of the new trans-Atlantic relationship.” Stade is a town in northern Germany where one of the terminals is expected to be built.

U.S. liquefied natural gas is mined, turned into liquid and shipped overseas. It requires special terminals for unloading, storing and converting it back into gas, making it around 20 percent more expensive than Russian gas, which is shuttled directly into Germany from Russian pipelines.