During Kavanaugh’s testimony, Cornyn directed questions towards Feinstein, asking how the media could’ve found out about the allegations when only she, a member of the House and Ford knew about them. (RELATED: Sen. Cornyn Goes After Sen. Feinstein Over Ford’s Allegations Being Leaked To The Media)

“[Sen. Cornyn] is always fighting for you and he was the one that asked Dianne Feinstein, did you leak? Remember? So, he was the one. He looks over to her, remember, to her during the hearings, those horrible hearings where they were so nasty and horrible to a great gentleman who will go down as one of our greatest Supreme Court Justices ever,” the president said.

Trump continued, “He goes out and he goes, he is on the committee, and he goes, did you leak? And she went ‘oh what, no, no! Wait a minute, let me check. Did we leak? No, we didn’t leak!’ That was the worst body language. She was so guilty of leaking. She leaked! John Cornyn was great during the hearings.” 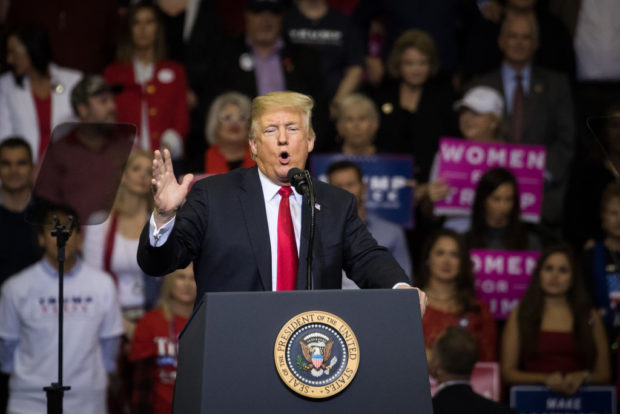 President Donald Trump addresses the crowd during a rally in support of Sen. Ted Cruz (R-TX) on October 22, 2018 at the Toyota Center in Houston. (Loren Elliott/Getty Images)

Trump was rallying in Houston, Texas on behalf of Senator Ted Cruz, who will face Democratic challenger Rep. Beto O’Rourke  in November. They were previously close in the polls, but Cruz has since pulled away from O’Rourke with the election only about two weeks away.