Republican Sen. Jeff Flake of Arizona said Tuesday morning on The View the protesters that accosted him in an elevator prior to the vote on Supreme Court Justice Brett Kavanaugh last month were not paid protesters despite them working for an activist group funded by George Soros.

The two women who yelled at Flake the day of Kavanaugh’s testimony are Ana Maria Archila and Maria Gallagher. Both of them are a part of the Center for Popular Democracy (CPD), a group that is funded by George Soros through the Open Society Foundation. Archila is the executive director of the CPD. (RELATED: Elevator Protester Admits She Works For Soros-Funded Organization)

The day after they confronted Flake, they appeared to get their wish. The congressman agreed to proceed to a full Senate vote as long as a week-long FBI investigation into the allegations would be conducted, which ultimately happened.

“Well, that was powerful. The president said they were paid protesters and whatnot. I don’t believe that. They had a story to tell, and they wanted me to hear it, and it was effective too. I was unsettled about the process. I felt that we should have done an FBI investigation,” Flake began.

“And I went from — that reaffirmed it, believe me, that experience in the elevator and I went right to the committee, and that’s when I, with [Democratic Sen.] Chris Coons in the ante room, worked on a plan to have a week-long delay and I felt that we needed to do due process. Have a fulsome process and I’m glad we did,” he continued.

“You were so taken back in that moment and you can see it in your face. If those women were in this room right now, what would you say to them?” Abby Huntsman asked. 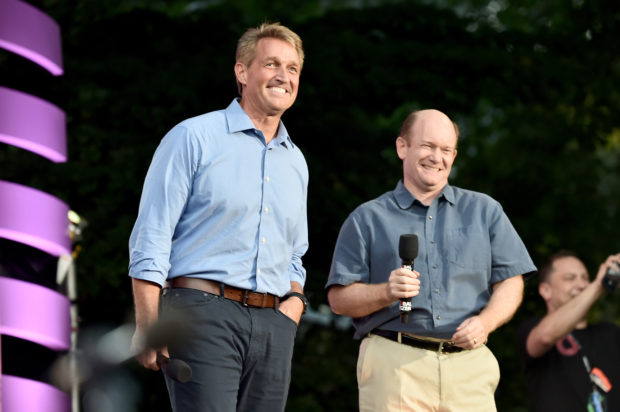 “Well, I mean the ‘MeToo’ movement is real and needed and good. And I felt for them. You could tell that it was genuine, and I just want them to know that we hear them. Things are — I don’t think will ever be the same after the last couple of years,” Flake answered.

Women confront Sen. Jeff Flake after he says he’ll vote yes to Kavanuagh: “That’s what you’re telling all women in America, that they don’t matter. They should just keep it to themselves because if they have told the truth you’re just going to help that man to power anyway.” pic.twitter.com/T7fSpyT69E