A Georgia middle school student was taken into custody after allegedly stabbing a teacher with an 8-inch butcher knife on Monday.

“We did take a 13 year old male student into custody today after he stabbed one of our 8th grade teachers,” a Monday message from Principal Ryan Queen to parents and guardians said. “The student reportedly called the teacher over and then struck her in the chest area with an 8-inch butcher knife that he had in his bookbag. Help was called and while our [school resource officer] SRO was responding to the room the young man grabbed another student. Our SRO was able to enter the classroom and disarm him without harm to anybody else. ”

The statement added that no other students or staff were hurt. 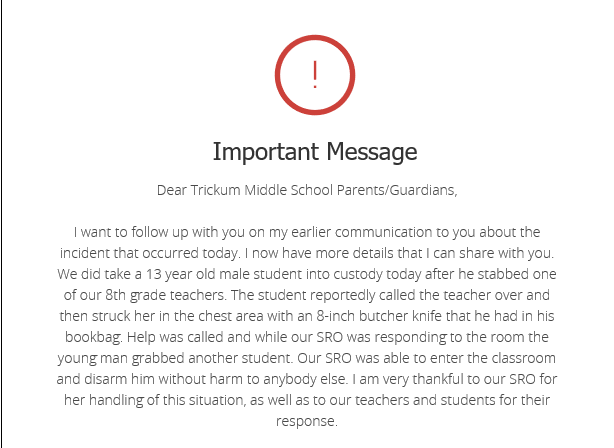 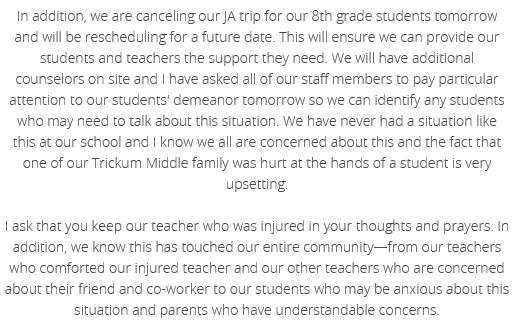 The school is calling families of students in the class at the time of the alleged stabbing. A school trip for eighth grade students was cancelled as a result of the stabbing, according to the statement. (RELATED: University Of Utah Track Star Killed In Shooting, Suspect Found Dead In Church)

The bottom of the message advises ways families can take care of their children. Suggestions include to “Observe children’s emotional state,” “Monitor your own stress level” and “Model calm and control.”

There did not appear to be an incident between the teacher and student that led to the stabbing, Gwinnett County Public Schools Executive Director of Communication Sloan Roach told The Daily Caller News Foundation in a phone call. The district is not releasing the teacher’s condition and the identities of both the teacher and the student at this time.