Fox News’ Griff Jenkins caught a group of illegal immigrants trying to cross the U.S.-Mexican border while reporting from Texas, forcing the group to at least temporarily turn back.

“Yesterday, we laid in the bushes in wait and we busted one of those smuggling operations,” Jenkins reported on Tuesday morning.

Jenkins camped out with his camera crew next to a river and caught a group of migrants trying to cross the river on a raft. When the group saw Jenkins with his crew, they turned back and settled on the Mexican shore. 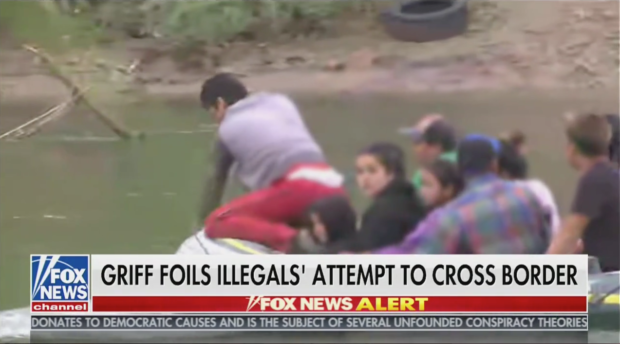 “Excuse me sir,” Jenkins yelled. “Were you trying to cross into America illegally?”

“What we’re witnessing now is clearly a family that was being brought over by that smuggler that was paddling in the raft,” he said. “They’ve gone back over there, we’ve seemed to have foiled this attempt but officials tell us he’s probably just gonna look for another spot.”

1
Judge On Roger Stone Case Goes After Tucker Carlson, Trump Over Comments About Juror
US
2
FBI Agent Faulted In FISA Report For 'Significant' Errors Has Finally Been Identified
Politics
3
Here's What College Students Had To Say About Third-Trimester Abortions
Politics
4
YouTube Star Asks Her Fellow Teenagers To 'Think' Before Jumping Aboard Greta Thunberg's 'Alarmism'
Energy
5
Trump Snaps At Jim Acosta’s One-Liner On 'Truth' In India — 'You Ought To Be Ashamed Of Yourself'
Politics