“Cory Booker said we should believe all victims, whether they’re anonymous or identified. But does he really want to live by that standard?” Ingraham asked. (RELATED: Cory Booker Says It Doesn’t Matter If Judge Kavanaugh Is ‘Innocent Or Guilty’)

An anonymous homosexual man posted a letter on Twitter over the weekend that claimed Booker had sexually assaulted him in a bathroom sometime in 2014.

Ingraham said the allegation was “a smear,” but suggested so too were the sexual misconduct accusations leveled against Supreme Court Justice Brett Kavanaugh prior and during his appearance at his Senate confirmation hearing. 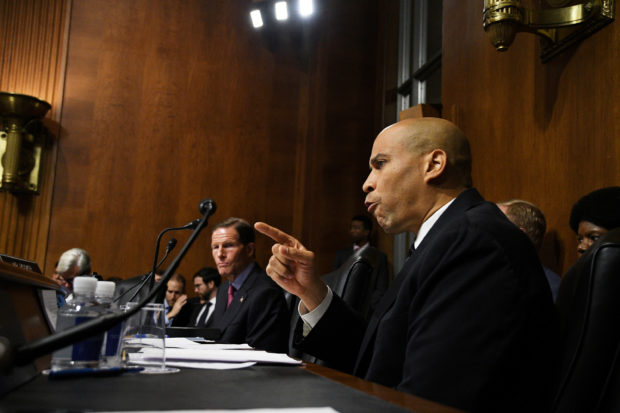 Sen. Cory Booker, D-NJ makes an impassioned speech during the Senate Judiciary Committee meeting to vote on the nomination of Brett M. Kavanaugh to be an associate justice of the Supreme Court of the United States in Washington, U.S., September 28, 2018. REUTERS/Mary F. Calvert

Still, Ingraham insisted, “if you’re going to make an allegation like this, you have to put your name to it.”

“We don’t raise this issue because we automatically assume it has credibility,” Ingraham said. “I don’t like anonymous allegations. We actually think everyone should wait for the details to come in before we say something like this, right?”

Ingraham said it showed hypocrisy for Democrats to insist unsubstantiated allegations against Kavanaugh should have been embraced while ignoring anonymous claims made on social media. Ingraham reiterated that she wasn’t trying to promote the Twitter letter, just the double standard. (RELATED: In College Column Cory Booker Revealed Time He Groped Friend, And She Resisted)