Tuesday marks the 35th anniversary of the 1983 Marine barracks bombing in Beirut, Lebanon, one of the deadliest days in Marine Corps history and a watershed moment in the history of international terrorism.

Along with the bombing of the American embassy in Beirut earlier that year, the destruction of the Marine barracks ushered in a new age of Islamist-inspired attacks on U.S. targets in the Middle East.

Both attacks occurred at the height of the Lebanese Civil War, a 15-year, multi-sided conflict that left much of the country in ruins. President Ronald Reagan sent the Marines to Lebanon in 1982 as part of an international peacekeeping force of American, French and Italian troops.

The multinational force in Lebanon was there to oversee the withdrawal of the Palestinian Liberation Organization and ensure the safety of remaining Palestinian civilians. But some local factions came to see the peacekeepers as favoring the Lebanese Christian forces, especially after U.S. gunships in the Mediterranean Sea began shelling the Syrian-backed militia in 1983.

It was in this context of rising tensions among the competing militia groups that the Marine barracks was attacked. On Sunday morning, Oct. 23, 1983, a driver rammed a 19-ton dump truck packed with explosives through the front gate of the barracks and crashed into the lobby of the building.

The diver, an Iranian national, then detonated the explosives, which were later estimated to carry the force of about 21,000 pounds of TNT. The explosion lifted the entire four-story building off its foundation and brought it crashing down on itself. 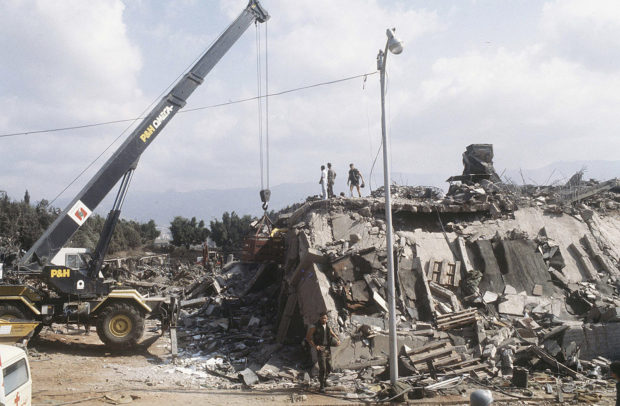 A crane is brought in after the explosion of the Marine Corps building in Beirut, Lebanon October 23, 1983. The U.S. Supreme Court on Wednesday ruled that almost $2 billion in frozen Iranian assets must be turned over to American families of people killed in the 1983 bombing of a U.S. Marine Corps barracks in Beirut and other attacks blamed on Iran. REUTERS/US Marines/Handout via REUTERS

A total of 241 U.S. Marines, sailors and soldiers were killed in the attack, most crushed to death by falling rubble. It was the largest loss of life for Marines since the battle of Iwo Jima in World War II.

Just minutes later, a second suicide bomber drove an explosive-laden truck into the barracks of a French paratrooper detachment in West Beirut. That attack killed 58 French troops, France’s worst military loss since the Algerian War in 1962.

A militant group called Islamic Jihad claimed responsibility for both bombings. The group was suspected of being a front for the nascent Hezbollah organization, which at the time was forming in Lebanon with backing from Iran’s Islamic Revolutionary Guard Corps.

Ties between Islamic Jihad and Hezbollah pointed to Iranian knowledge of the attacks, a charge that Tehran denies to this day. Families of the victims of the barracks bombing sued Iran in federal court in 2001, ultimately winning a judgement that found Tehran culpable for providing Hezbollah the financial and logistical support needed to carry out the attack. (RELATED: Supreme Court Rules Iran Should Pay Victims Of Terrorism) 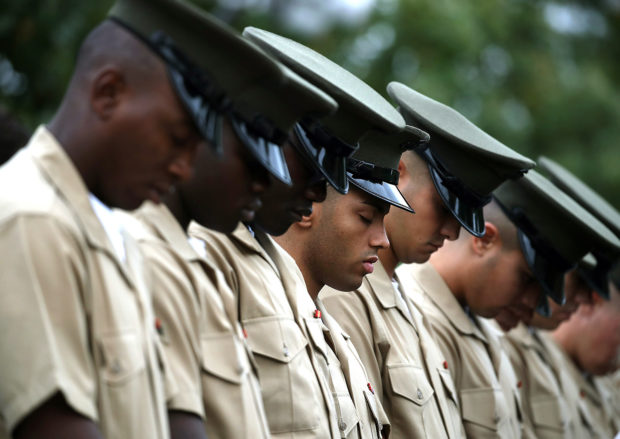 U.S. Marines bow their heads during a ceremony to commemorate the anniversary of the 1983 bombing of the Marine barracks in Beirut, Lebanon, at the Marine barracks on October 23, 2017 in Washington, DC. 34 years ago today terrorist detonated two truck bombs at a building that housed U.S. troops, killing 220 Marines, 18 sailors and 3 soldiers. (Photo by Mark Wilson/Getty Images)

While the extent of direct Iranian involvement remains a matter of debate, the barracks bombing’s legacy as a blueprint for future terrorist attacks by Islamist groups is clear. Hezbollah used a similar truck-borne suicide bomb to blow up the Khobar Towers in Riyadh in 1996, and al-Qaeda employed the tactic to devastating effect in the 1998 bombings of American embassies in Nairobi, Kenya and Dar-es-Salaam, Tanzania.