Democratic challenger Scott Wallace may have given his opponent the edge when he dropped an F-bomb in a synagogue during their debate on Sunday.

Both candidates were standing on the synagogue’s “bimah,” an elevated platform used for reading the Torah during services, when Wallace used the expletive. Fitzpatrick was “stunned” Wallace made the comment.

In addition to Fitzpatrick, people in the synagogue and the moderator took exception with Wallace’s obscenity.

Frustrated at being confronted about his false ad that fact checkers have called him out on, @ScottWallacePA drops “F” word at debate with @BrianFitzUSA at Synagogue Tifereth Israel in front of shocked crowd. #PA01 https://t.co/UBbGtByUdT

Can’t believe that @scottwallacepa dropped an F-bomb in a Synagogue during a debate tonight with @brianfitzusa. Unhinged. #PA01

Incumbent Republican Rep. Brian Fitzpatrick spoke with WBCB News following the debate, saying, “Ironically, there was a later question about the need for civility in politics. Well, a good start is to not use vulgarities in the sanctuary of a synagogue in the middle of a congressional debate.” 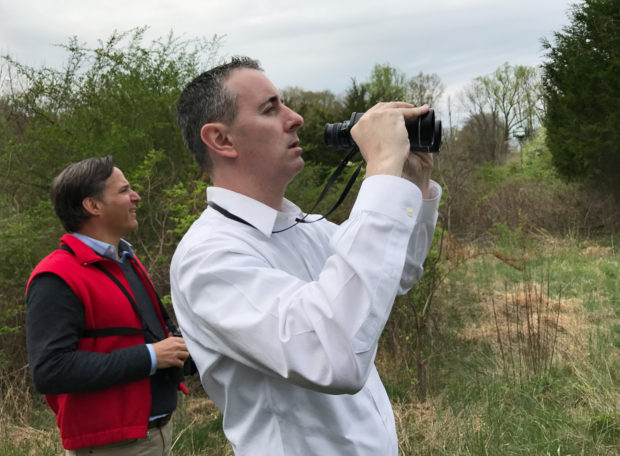 Wallace offered a statement on Monday apologizing for his language but blaming his frustration on his opponent.

“I was exasperated by yet another attempt from Rep. Brian Fitzpatrick to hide from his votes to take away protections for people with pre-existing conditions.

I apologize for any offense that might have been taken. I am passionate about protecting people from insurance company abuses, and I’m sorry that in this instance, my frustration got the best of me.”

Wallace has been campaigning on health care issues, claiming in advertisements that Fitzpatrick voted to “take away protections for people with pre-existing conditions,” but a fact-check on those ads done by the Washington Post determined that Fitzpatrick had actually done the opposite.

“… these were not votes against protecting preexisting conditions; they were votes against ending debate so an amendment could be offered to change the rules of the House. There was never a vote on the actual amendment.”

Wallace is currently engaged in a tight race for Pennsylvania’s 1st District — considered a toss-up, according to RCP’s latest averages — with Rep. Fitzpatrick.