Fox News released a statement on the bomb scare that shook CNN and several political figures Wednesday, and stood in solidarity with its fellow news network, condemning all acts of attempted violence.

Fox’s human resources chief Kevin Lord issued the internal memo and said employees’ thoughts are with CNN and its staff.

“We condemn all attempted acts of violence against media organizations and our thoughts are with CNN for the safety of all of their employees.” pic.twitter.com/4wltbIYpIf

Lord also said the network is beefing up its internal security in response to the threats.

CNN’s New York bureau in the Time Warner Building was evacuated as the New York Police Department responded to the potential threat. 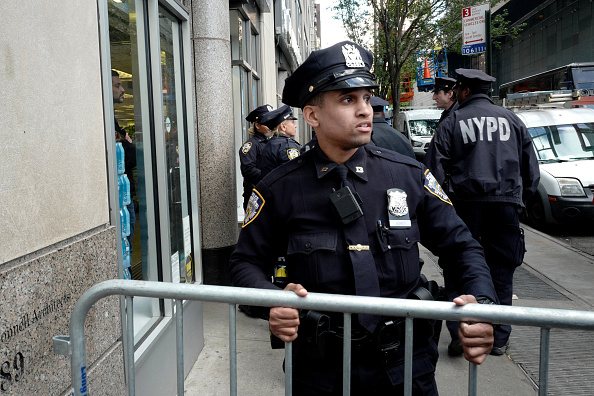 A New York Police Department (NYPD) officer moves a barricade outside of the Time Warner Center in New York, U.S., on Wednesday, Oct. 24, 2018. U.S. news media stepped up security measures on Wednesday after a suspicious package was found at CNN’s New York offices, the latest in a string of incidents this week that also targeted Barack Obama, Hillary Clinton and George Soros. Photographer: Philip Brian Tabuas/Bloomberg via Getty Images

In addition to CNN, “potential explosive devices” were sent to Bill and Hillary Clinton’s residence and former President Barack Obama.

The Secret Service intercepted the devices late Tuesday night and early Monday morning respectively and said the Clintons and Obamas were not “at risk of receiving them.”

This comes after billionaire George Soros received an explosive device in his mailbox at his home in New York, Monday afternoon.

A fifth package was sent by mail to the office of Democratic Rep. Debbie Wasserman Schultz in Florida Wednesday and her building also had to be evacuated.

The area has since been secured and the bomb squad called in.