A second migrant “caravan” is reportedly assembling in Guatemala and heading north.

The group began with about 1,000 people but has grown to 2,500, according to The Wall Street Journal. The first group of would-be refugees began with roughly 200 marchers. 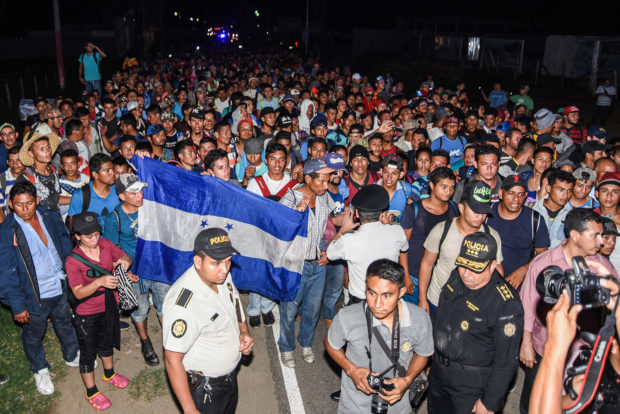 Honduran migrants taking part in a new caravan heading to the US, arrive to Chiquimula, Guatemala, on October 22, 2018. – US President Donald Trump on Monday called the migrant caravan heading toward the US-Mexico border a national emergency, saying he has alerted the US border patrol and military. ORLANDO ESTRADA/AFP/Getty Images

Refugee workers say the group will undoubtedly grow in size.

“We know this won’t end in a few days and will be a long progress of migration,” said one worker in Guatemala City, according to Reuters.

President Donald Trump has restated his conviction that “people from the Middle East” have infiltrated the throng of migrants and MS-13 gang members are also on their way to U.S. soil. (RELATED: Pence: Honduran President Says Venezuela Funding Migrant Caravan)

The Department of Homeland Security told Fox News that gang members are among the migrants, all of them are not Central American residents, and some could be from the Middle East.

Declaring the wave of migrants a “national emergency,” the president has indicated he may use the Army to block the migrants from walking across the U.S. border, or cut-off funding to those Central American countries not doing enough to stop them. Together, El Salvador, Guatemala and Honduras receive $500 million in foreign aid from American taxpayers.

“Guatemala, Honduras and El Salvador were not able to do the job of stopping people from leaving their country and coming illegally to the U.S. We will now begin cutting off, or substantially reducing, the massive foreign aid routinely given to them,” Trump tweeted.