Reports of potentially explosive devices were sent to the Obamas, Clintons, CNN and left-wing billionaire George Soros spread throughout the media on Tuesday, and without any knowledge of the perpetrator, many have already begun blaming President Trump.

The package CNN received at their Time Warner building in New York City was similar to those sent to the Obamas and Clintons, according to the New York Police Department.

NBC News reported that the devices arrived in manila envelopes. The return address was that of Democratic Florida Rep. Debbie Wasserman Schultz, whose office was also evacuated after receiving a suspicious package. 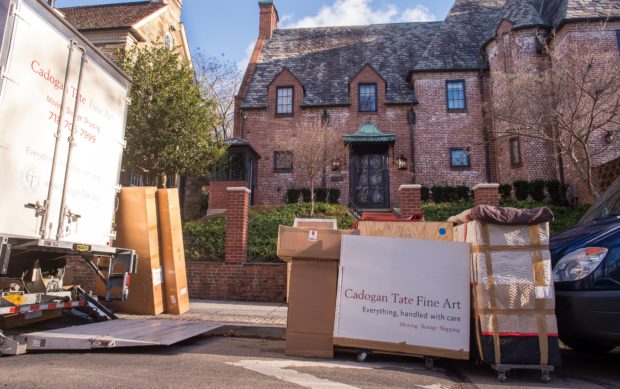 FILE: A moving truck is seen outside the new home of former President Barack Obama in the Kalorama neighborhood of Washington, D.C., on January 18, 2017. (Photo: PAUL J. RICHARDS/AFP/Getty Images)

Without any knowledge of who sent the packages, many people blamed the president, alleging that his rhetoric about the Clintons, Obamas and CNN has encouraged terrorist behavior toward left-leaning media and Democrat politicians.

CNN’s Jim Sciutto, who was on air when their building was evacuated, later said of the targets, “They’re all on that list. You’ve just listed a number of folks [whom] the president has accused of being unfair to him — that the president has publicly attacked at times.”

Do you strongly condemn your father using the presidential bully pulpit and years of campaign rallies to constantly stir up hatred against CNN, Hillary Clinton and Barack Obama? https://t.co/9D8pov74YX

MSNBC morning host Joe Scarborough quote-tweeted Ivanka Trump condemning the bombs and asked if she would also condemn her “father using the presidential bully pulpit” to “stir up hatred” against them.

.@realDonaldTrump with every fiber of your rotten being you‘ve incited & condoned hate. Never in 643 days have you discouraged people from unleashing the violence inside them. Your very existence requires anger & fear. You need it like normal people need oxygen.

This is on you.

Philippe Renies, a former Hillary Clinton aide, appeared on “Tucker Carlson Tonight” on Monday, during which he blamed the president for the bomb sent to Soros, prior to the other packages were identified. (RELATED: Tucker Cracks Up When Former Hillary Aide Says Soros Bomb Is Trump’s Fault)

Trump wrongly convinced his supporters that Clinton, Obama, Brennan, and Soros are behind a “deep state” conspiracy theory. He uses Stalinist rhetoric to demonize the press. He has explicitly praised political violence. And now his favorite targets are being targeted by bombs.

Whoever could that mysterious “someone” be? https://t.co/LtX5zEmVxQ

But lock her up, amirite? https://t.co/wJMtqPb29u

This week all of them received BOMBS in the mail.

This isn’t that hard.

The President is encouraging TERRORISM.