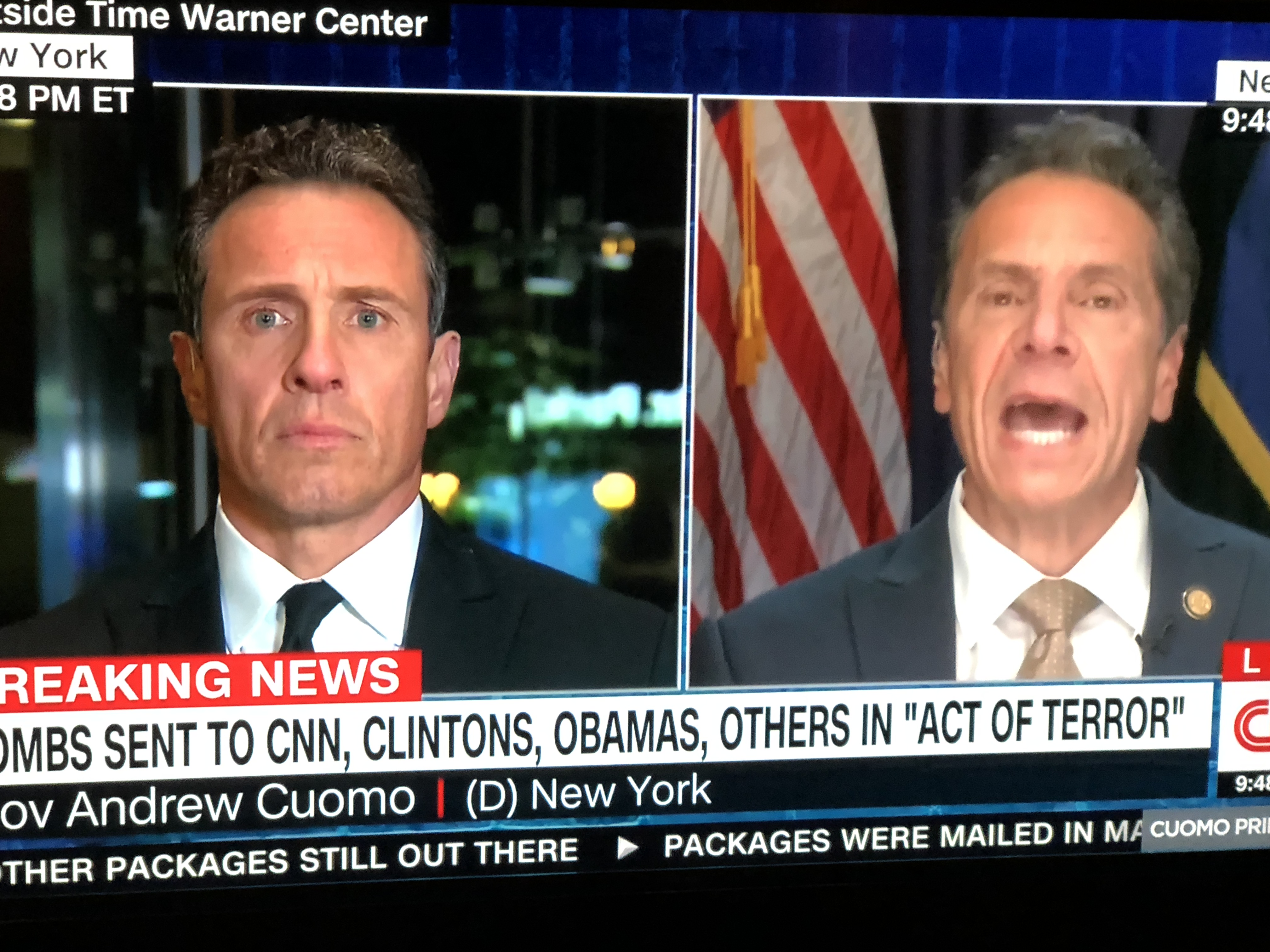 “A lady in a red hat with a sparkly Trump pin just walked up to me and @kaitlancollins in the press pen as the Wisconsin rally clears out. ‘I love you guys!’ she said, making a heart with her hands.” — Betsy Klein, CNN White House reporter.

An update on journo’s wife who has vertigo

All week, HotAir‘s Jazz Shaw has been tweeting about his escapades in the ER with his wife, who was diagnosed with persistent vertigo. Her scan was negative for anything serious. The latest: “Let loose the balloons and doves. My wife is home from the hospital. Now setting up for home physical therapy stuff.”

CNN’s Brian Stelter: There’s a lot we don’t know about these packages but we do know what all the targets had in common: They have all been criticized mercilessly by right-wing outlets.

The Daily Caller‘s Amber Athey: Criticizing your news coverage does not make us responsible for a crazy person sending you a bomb and you should apologize for this disgusting smear.

When asked to choose between flip-flops or socks with sandals, WaPo‘s Jonathan Capehart replied, “You ain’t right! Neither…But the former and ONLY at the beach. Like, on the actual sand or boardwalk.”

Journo rant of the week

“All day today, CNN personalities referred to Trump’s obvious lie about unknown Muslims in the caravan as a thing he said ‘without providing evidence.’ Which allows for it being true.Which at this point, is malpractice. If you were covering a charismatic conman who used hyperbolic lies to bilk people of money, you wouldn’t just repeat the random shit that came out of his mouth or his spokesperson. It’s not goddamn rocket science.” — John Stanton, senior national correspondent, BuzzFeed.

“Dear white people who are upset that you can’t dress up as another race or culture for Halloween: your feelings don’t matter. The only feelings that matter are of those who feel disrespected/mocked by you appropriating their culture for entertainment. Show some common decency.” — Kirsten Powers, who is also a political analyst at CNN.

“Dear Twitter: When you block someone on Twitter, and then tweet sub-moronic cretinisms at them, they generally can’t read what you write, so you’re essentially engaging in rhetorical onanism.” — Steve Sebelius, political analyst, Las Vegas CBS affiliate.

CRIME BLOTTER: RealClearPolitics editor’s laptop was stolen from his car; no one was hurt

The editor is Carl Cannon and this is some of what he had to say in a morning note on Wednesday. Sometimes his morning notes read like a history lesson and make me want to Zzzzzz. But this one was entertaining.

“Yesterday evening, while at a meeting on Capitol Hill, my car was broken into. The thief smashed a window and took my briefcase, which contained my laptop. It’s a chafe when your car is vandalized, your belongings stolen. Replacing a computer, and all the material you have on it that you haven’t backed up, well, it’s a daunting chore. But what choice do you have?”

Cannon reported the incident to the police. He took his car to the dealer. He canceled a check.

“I’d been at the house about five minutes when the doorbell rang. A friendly middle-aged Asian couple — I believe they were Korean — was at the door. I had trouble understanding them at first, so to make it easy, they handed over my briefcase. The leather was scuffed up a bit, a few personal items were missing, and the laptop body was chipped, but I’m writing on the machine now, so it apparently still works.”

He thanked the Asian couple for helping him out and offered them gas money, which they refused.

“I was so stunned I neglected to get the names of these Good Samaritans, which I regret because I would have liked to send them a note of gratitude. So, this Morning Note will have to do.”

“As the Lin-Manuel Miranda famously noted: Immigrants, they get the job done. Thank you!”

The Washington Post profiled Brit McHenry in its magazine. You might know her as the then-ESPNer whose name ID catapulted in 2015 after she yelled at a towing company employee about her missing teeth. “That’s why I have a degree and you don’t,” she said in a mean-girl rant that was caught on video. And this: “Maybe if I was missing some teeth they would hire me, huh?”

McHenry wants to put all that — and a few other tweets  she regrets — behind her and be a serious journalist.

After ESPN laid her and many other employees off last year, she went to The Federalist to cut her teeth on being a conservative. Now at Fox News, she will co-anchor a talk show called “Un-PC” on Fox Nation, a digital streaming service that begins on Nov. 27.

“While attending Northwestern University’s graduate journalism program, she interned in the political unit at Fox News, running scripts and logging speeches. Once, she fetched Brit Hume’s coffee. She recounts this story in the Fox News makeup chair, as one woman swipes bronze shadow onto her eyelid and another teases her roots. Red hair dryers hang from the ceiling like expensive piñatas. ‘He goes, ‘Thank you. What’s your name?’ And I’m, like, star-struck,’ she recalls. She told him her name, ‘and he’s like’ — she mimes a quizzical expression — ‘That’s my name!’”

Back in August… The Mirror reported that Susan Fowler, a staff editor for NYT’s opinion section, was taking a serious break from Twitter. It came on the heels of her coworker, Maggie Haberman, who also promised to leave Twitter (wink! wink! in the sense of engaging). Haberman even wrote an entire op-ed about it.

Well that whole thing didn’t last long. Both these women are back on Twitter.

This is what Fowler wrote back in August:

“Hello friends! I’ll be taking a twitter break for the rest of 2018 Today I received some especially nasty hate mail, and it was a little too much even for me You can find me on Instagram or contact me using the form on my site Be kind to each other. See you in January!”

And today… “Breaking my no-twitter-except-retweeting-edits rule: I really want to learn how to knit and need some recommendations for how to get started. I know some of you knit and are really good at it! Pls help! I want to make cozy sweaters and little knitted snowmen and Santa hats.”

TMZ: An NBC source says Megyn Kelly‘s coworkers hated being on air with her. Here.

NYP‘s Page Six: This is really getting pretty weird. Kelly, who is out at NBC, wants a witness — Ronan Farrow — in the room when her lawyer meets with NBC. Here. Another question — what’ll happen to Dana Klinghoffer, a publicist who Kelly dragged over from Fox News.  Klinghoffer didn’t return a basic request for comment Wednesday night. Of course, I’m not surprised.

An anonymous source told People Mag: “They’re contacting the staff and reassigning everyone today. Everyone’s being told that they still have a home here, but it won’t be on Megyn’s show,” one source says.