Republican Senate candidate Josh Hawley shared a photo Wednesday of a yard sign that had been vandalized. A bright yellow swastika covered his name on the sign.

“Is this really what it’s come to?” he asked.

In Andrew County this morning. Is this really what it’s come to? Swastikas? #MOSen pic.twitter.com/xV0CVlnOhz

Hawley, who is currently serving as Missouri Attorney General, said that he came across the doctored yard sign while campaigning in Andrew County, part of the northwestern corner of the state.

Many tried to relate the swastika to comments from President Donald Trump — who has endorsed Hawley — claiming that this was the natural result of him declaring himself a “nationalist.” 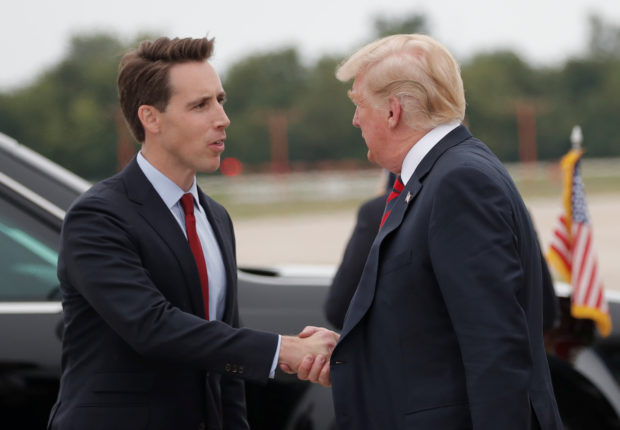 At least one Missouri Democrat seemed willing to rally behind Hawley, regardless of party differences. Bruce Franks Jr., who serves in the Missouri House of Representatives, tweeted, “Def don’t agree with that!” (RELATED: Hawley Finally Busts Out Of The Margin Of Error In Missouri Senate Race)

Def don’t agree with that! Smfh

Hawley is barely ahead in polls for the Senate race against incumbent Democratic Sen. Claire McCaskill — a race that remains so close that RealClearPolitics is classifying it as a “toss up.” The two will square off in one final debate Thursday evening.

My view of today’s @clairecmc @HawleyMO debate at @kmbc (see it tonight at 9) #MOSen pic.twitter.com/hW0uVWY8LO

Sen. McCaskill also weighed in on the vandalized signs, tweeting “I agree. Disgusting.”