MSNBC anchor Katy Tur exploded on conservative guest Erick Erickson on Thursday when Erickson pointed out the scourge of violent left-wing rhetoric in the past year.

Tur asked Erickson, who does not support President Trump, why he has not been tougher on Trump’s attacks on his opponents following Wednesday’s bomb scare.

Erickson agreed that Trump should be a “unifier,” but added that he thinks Democrats also hold some responsibility for the current level of vitriol in the political arena.

“There are folks on the other side who need to tamp down their rhetoric as well,” Erickson said. “We had ricin attacks against [Republican Senators] Susan Collins and Ted Cruz last week, protesters chasing people out of restaurants. I think both sides need to calm down.” 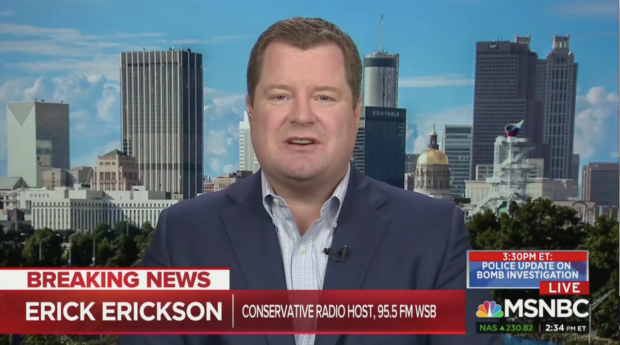 Erickson added that he doesn’t think it is helpful to narrow down “who started it.”

Tur said that she doesn’t condone any attacks against Republicans but denied that Trump didn’t “start” the downturn of political rhetoric.

“I do think it’s pretty clear when you’re talking about this toxic political environment that it did start with — mostly — with Donald Trump,” Tur said. “He started his campaign by calling Mexicans rapists, he repeatedly cheered on crowds that were screaming ‘lock her up’ for Hillary Clinton — ”

Erickson chimed in to ask if she wanted to go back to President Barack Obama telling supporters to bring “a gun to a knife fight” or to Timothy McVeigh in the 1990s.

“Have you ever heard a politician, other than Donald Trump, say I’m so proud or give a kudos to another politician who body slammed a reporter?” Tur asked.

Erickson said, “Donald Trump is not to blame for the mass shooting against Republicans last year — you had Democrats saying Republicans were killing people.”