Nearly two dozen residents of Oregon and Washington have been charged for allegedly partnering with a Mexican drug cartel to distribute methamphetamine and other drugs throughout the Pacific Northwest, federal officials announced Thursday.

A nine-count federal indictment alleges that 22 members of an Oregon trafficking ring distributed large quantities of methamphetamine, heroin and cocaine for a a cartel based in Michoacan, one of Mexico’s most prolific drug-producing states.

The cartel allegedly funneled the drugs to ringleader Victor Alvarez Farfan, 43, of Oregon City, who distributed them to associates to sell in the Oregon cities of Hillsboro, Gresham, Portland and Hood River, as well as Tacoma, Washington, according to the Department of Justice.

Farfan was charged with conspiracy, two counts of possession with intent to distribute methamphetamine, and conspiracy to commit the laundering of monetary instruments. Other defendants were indicted on conspiracy and distribution charges. (RELATED: Illegal Immigrants Arrested In Oregon County’s Biggest-Ever Meth Bust)

“Meth, heroin and cocaine combine to form a deadly cocktail that fuels a cycle of violence and addiction in our community,” Renn Cannon, Special Agent in Charge of the FBI in Oregon, said in a statement. “The FBI and our partners are targeting the power players in these drug trafficking organizations as we work to reduce the flow of guns, drugs and dirty money into Oregon.”

Early Thursday, federal agents and local police arrested 17 of the suspects in a multi-jurisdiction sweep. The identities of the five remaining defendants remain under seal pending their arrest, according to prosecutors.

The named defendants are: 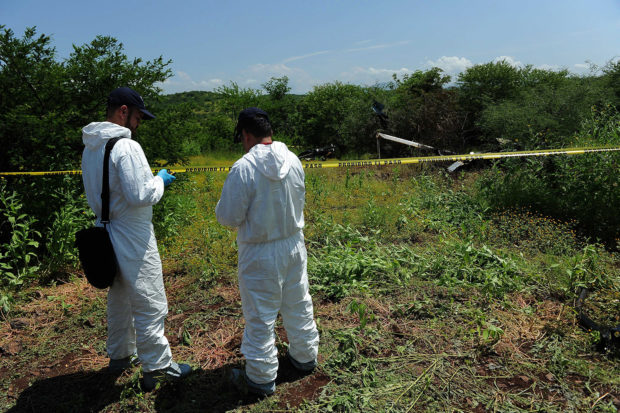 State forensic personnel work on the site where a police helicopter participating in an operation to capture leaders of an unidentified criminal group was shot down on the eve, on September 7, 2016 in El Chauz, Michoacan State, Mexico.
Authorities hunted on Wednesday for gang suspects who shot down a helicopter carrying police in western Mexico, killing four aboard in a clash highlighting the government’s struggle to quell violence in the region. PEDRO PARDO/AFP/Getty Images

It was unclear if any of the defendants named in the indictment are Mexican nationals or are suspected of immigration violations. Immigration and Customs Enforcement (ICE) did not immediately respond to a request for comment on the case.

The crystal meth trade in Oregon is dominated by Mexican drug trafficking organizations, which use the Interstate 5 drug corridor to distribute the drug up an down the Pacific coast. At least 90 percent of all crystal meth consumed nationwide is produced in Mexico, according to the DEA.