When the shoe was on the other foot, and it was Republicans targeted by a would-be assassin, she dismissed the idea that liberal rhetoric could have played any role.

In a joint statement with Senate Democratic Leaders Chuck Schumer, Pelosi said President Trump’s condemnation of the acts “ring hollow until he reverses his statements that condone acts of violence.” 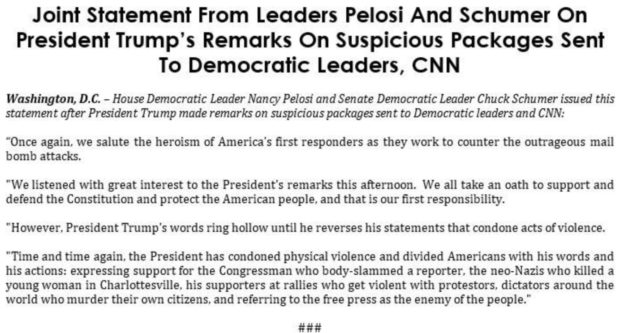 “How dare they,” Pelosi said at a press conference when it was suggested that heated Democratic rhetoric played any part in inspiring Hodgkinson’s actions.

“First of all, the timing of it all. Everybody is so sad, so concerned, so coming together,” Pelosi said about being asked the question so soon after the attack. “Don’t you think it’s strange that instead of praying … that they would start saying—”

She then stopped herself and concluded, “Let’s have this conversation another day.”