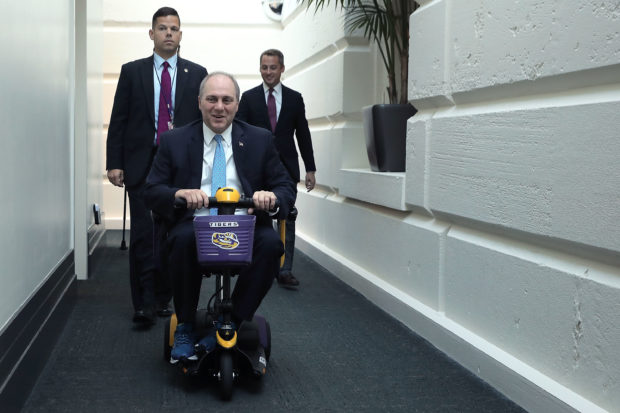 WASHINGTON, DC – OCTOBER 03: House Majority Whip Steve Scalise (R-LA) rides on a Louisiana State University-themed scooter as he arrives for the weekly House GOP conference meeting at the U.S. Capitol October 3, 2017 in Washington, DC. This was Scalise’s first conference meeting since being shot during a Congressional sports practice in June. (Photo by Chip Somodevilla/Getty Images)

Trump addressed the issue prior to signing legislation at the White House, saying, “In these times, we have to unify. We have to come together.”

He also called the suspicious bomb-like packages mailed to Democratic leaders “abhorrent to everything we hold dear and sacred as Americans.” 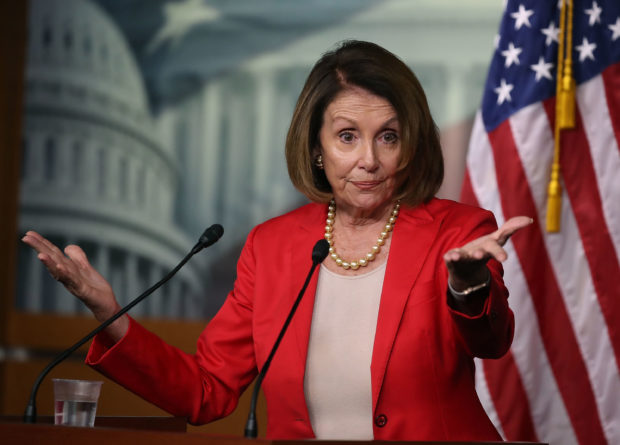 They went on to say:

Time and time again, the President has condoned physical violence and divided Americans with his words and his actions: expressing support for the Congressman who body-slammed a reporter, the neo-Nazis who killed a young woman in Charlottesville, his supporters at rallies who get violent with protestors, dictators around the world who murder their own citizens, and referring to the free press as the enemy of the people.

Pelosi, however, was on the defensive just over one year ago in June 2017 after James Hodgkinson, an Illinois resident and left-wing activist went on the rampage with a firearm at the Republican congressional baseball practice.

Hodgkinson died from his wounds after being shot by Capitol Hill Police, but not before he managed to shoot and injure Congressman Steve Scalise.

For anyone who wants to correlate Trump’s rhetoric with today’s attempted attack on Democrats — listen to how @NancyPelosi felt about correlating Democrats’ rhetoric to the shooting of @SteveScalise: pic.twitter.com/d55N8aQvGW

So this sick individual does something despicable, and it was horrible what he did. Hateful. But for them all of a sudden to be sanctimonious as if they’ve never seen such a thing before … and I don’t even want to go into the President of the United States, but in terms of the language he has used…

Pelosi went on to say further. “How could they possibly say such a thing? First of all, the timing of it all … Let us all step back and examine our own conscience and see what negative attitudes we could all curtail but the sanctimony of it all — really?”

She added, “Don’t you think it’s strange that instead of being prayerful about this that they would start saying — let’s have this conversation another day.”