U.S. troops are scaling back in-person contact with their Afghan counterparts following a series of insider attacks targeting members of the North Atlantic Treaty Organization (NATO) coalition in Afghanistan, including the top American commander there.

“Regular contacts” by telephone and email are still occurring between U.S. and Afghan security officials, while some meetings have been moved to U.S.-controlled facilities, the spokesman told WaPo.

Military officials say the precautionary measures were taken in response to an insider attack in the western Herat province Monday, when an Afghan soldier allegedly shot and killed a Czech soldier and wounded two others. That attack was the third time in four months that a NATO service member has been killed in a green-on-blue incident — two American troops were killed in similar attacks in July and September.

Four days before the Herat assault, the coalition’s vulnerability to insider attacks was made clear by the assassination of Lt. Gen. Abdul Raziq, the chief of police in Kandahar province and one of the most powerful officials in southern Afghanistan. Raziq and two other Afghan leaders were killed when a member of the provincial governor’s security detail opened fire during a meeting with U.S. military officials. (RELATED: Top US General In Afghanistan Survives Taliban Sneak Attack That Kills Police Chief) 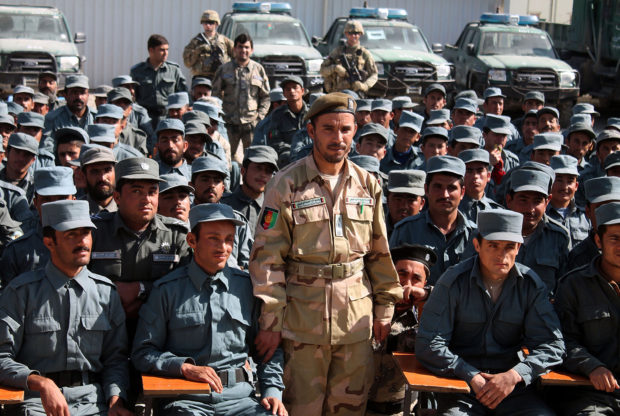 In this photo taken on February 19, 2017, Afghan General Abdul Raziq (C), police chief of Kandahar, poses for a picture during a graduation ceremony at a police training centre in Kandahar province. – An Afghan security chief and a journalist were killed and three Americans wounded on October 18 when a gunman opened fire on a high-level security meeting attended by top US commander General Scott Miller, officials said. JAWED TANVEER/AFP/Getty Images

Present at the meeting were U.S. Army Gen. Austin “Scott” Miller, the commander of U.S. Forces Afghanistan, and Army Brigadier Gen. Jeffrey D. Smiley, the head of Resolute Support’s train-and-advise mission in southern Afghanistan. Miller was unhurt in the attack, but Smiley suffered a gunshot wound.

The Taliban claimed responsibility for the attack, saying it had targeted the top provincial officials and U.S. commanders alike. NATO officials downplayed the claim that Miller was a primary target, but the idea that such a high-level meeting was infiltrated by a Taliban attacker has added to overall concerns about the deteriorating security environment in Afghanistan.

Insider attacks against U.S. troops have declined from their peak in 2012 thanks to enhanced vetting of Afghan security forces and revised security procedures at military facilities. However, they remain a significant threat to Afghan troops — there were 47 so-called “green-on-green” attacks against Afghan security forces by assailants from within their own ranks between Dec. 1, 2017, and May 31, according to the Pentagon.

Over the same time period, there were no “green-on-blue” attacks against U.S. service members.