The man arrested in connection to this week’s bomb scares appears to own a white van covered in Trump- and Republican-Party-themed stickers and decals.

Authorities arrested a 56-year-old man in Florida on Friday after 12 suspicious packages containing explosive devices were sent to various high-ranking Democratic officials. The Department of Justice confirmed the arrest and announced a press conference at 2:30 p.m. on Friday. (RELATED: DOJ Confirms Arrest Made In Connection To Bombs) 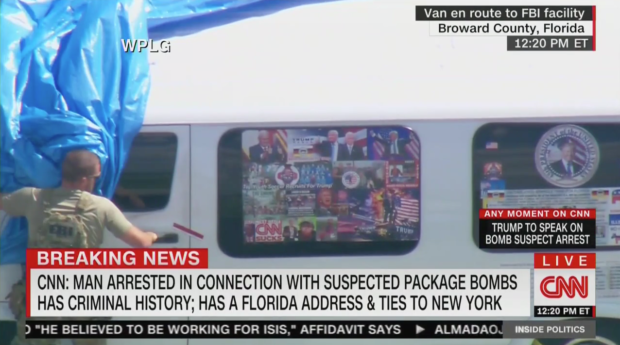 Video of police towing away the suspect’s van in Plantation, Florida, revealed that the windows of the vehicle were covered in a number of stickers. 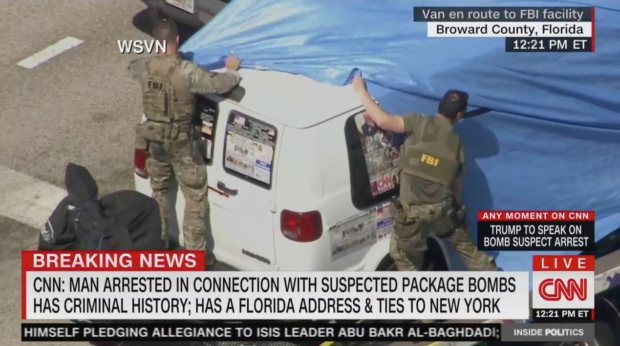 Some of the stickers appear to show images of President Donald Trump, a presidential seal, and a Republican Party elephant. Another clearly says, “CNN Sucks.”

BREAKING IMAGES: White van allegedly belonging to package-bomber appears to have photos of Trump, Presidential seal in the windows pic.twitter.com/z3TMfBuHiY

Suspect arrested in pipe bomb case had right wing & Trump stickers all over his van. His political affiliations are not yet confirmed, but one can get a pretty good idea from his targets. And his van stickers. https://t.co/tB8EHzNzXX pic.twitter.com/ktuU6yzwA7

Police covered the van in a blue tarp before towing it away, presumably to prevent people from seeing the stickers.

According to reporting by CNN, the man has a Florida address, a criminal history and ties to New York City.