On the same day that Trump nominated Brett Kavanaugh — but prior to the announcement — Casey announced his opposition to whomever Trump tapped.

When asked about it during the debate, Casey stated, “We’re in a new world now, where the United States Supreme Court, the two justices who have been confirmed, were chosen by two groups — The Federalist Society and The Heritage Foundation. Two extreme right organizations. The president told us that pretty early in his administration that he would only choose from 25 names.”

“There are hundreds of conservative Republican appointed federal judges in the country — appellate court judges who could serve on the court, district court judges who could serve, and even State Supreme Court Justices like Sandra Day O’Connor,” he continued. “She came from the Arizona Supreme Court. So there are hundreds of judges to choose from but they’re all disqualified, those conservative Republican judges are disqualified.” (RELATED: Lou Barletta Calls Out Bob Casey For Hurtful Ad: ‘The Lowest Thing I’ve Ever Experienced’) 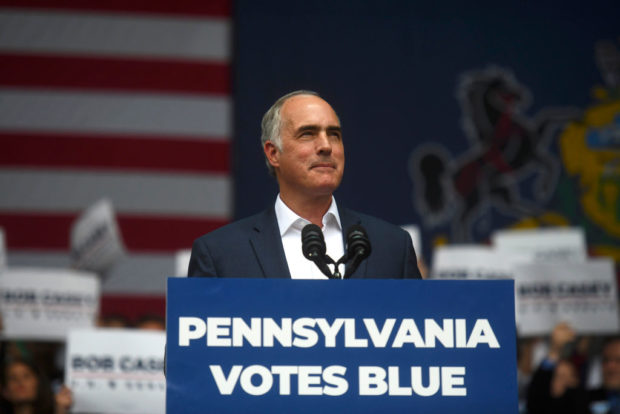 The moderator then posed the opposite question to Barletta, asking if he’d just be a rubber stamp for the president.

Barletta responded, “Obviously the American Bar Association said that Justice Kavanaugh was more than qualified. So the Senate’s responsibility is to advise and consent and what list did President Obama pick from? We don’t know because it wasn’t transparent.”

He went on to say, “And you know what’s amazing about this, this may be the biggest example in the country of resistance and obstruction, stop anything that this president is doing.”

Casey is currently a double-digit favorite in the polls, according to FiveThirtyEight.

President Trump has endorsed Barletta and has held two rallies in Pennsylvania on his behalf — one in August and another in October.