Broncos cornerback Chris Harris had his hands full on against the Kansas City Chiefs earlier this month, and he’s got the stats to back it up.

The 29-year-old star reportedly wears a Fitbit during almost every NFL game to track his fitness levels and overall health. Normally, Harris runs about 11 miles per game. I don’t care who you are, that’s pretty impressive. (RELATED: Former NFL Lineman Roy Miller’s Divorce Gets Nasty After Domestic Violence Allegations) 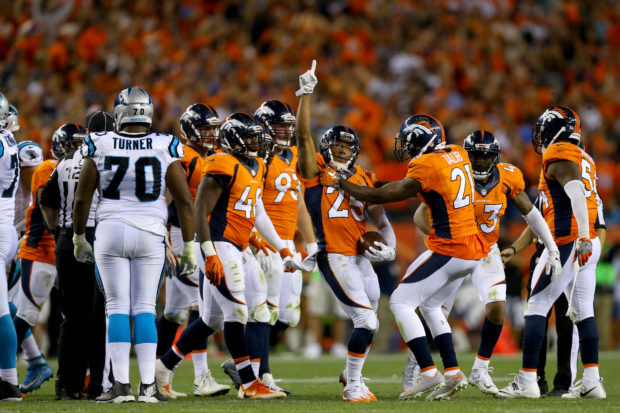 DENVER, CO – SEPTEMBER 08: Cornerback Chris Harris #25 of the Denver Broncos celebrates as he intercepts a pass thrown by quarterback Cam Newton #1 of the Carolina Panthers in the second half at Sports Authority Field at Mile High on September 8, 2016 in Denver, Colorado. (Photo by Justin Edmonds/Getty Images)

But the Chiefs gave him a run for his money on “Monday Night Football” — quite literally.

According to the subscription-based sports newspaper The Athletic, Chris Harris tacked on an additional four miles to his typical 11 miles. That’s right. He ended up running 15 miles against Patrick Mahomes’ offense.

Broncos CB Chris Harris looked at his Fitbit after the Broncos’ game vs. the Chiefs this season: he had run nearly 15 miles. He couldn’t remember running more than 11 in a game before. @bylindsayhjones on the hangover effect of facing the Chiefs’ offense: https://t.co/y82zm6tG1Y

If this doesn’t convince you that the Chiefs are playing at a championship level, I don’t know what will.