The chancellor of the University of Massachusetts Amherst described the proposal by U.S. Department of Health and Human Services (DHS) to define gender based on biology as “odious,” in a statement emailed to students Wednesday.

Kumble Subbaswamy, who has served as the university’s chancellor since 2012, referenced a recent New York Times article reporting that “the Trump administration is considering narrowly defining gender as a biological, immutable condition determined by genitalia at birth.”

The Times article based its assertion on a leaked internal DHS memo, which stressed the importance of a concrete definition of gender for the purpose of enforcing sex-based discrimination law. The memo reportedly claimed that “key government agencies needed to adopt an explicit and uniform definition of gender as determined ‘on a biological basis that is clear, grounded in science, objective and administrable.'” 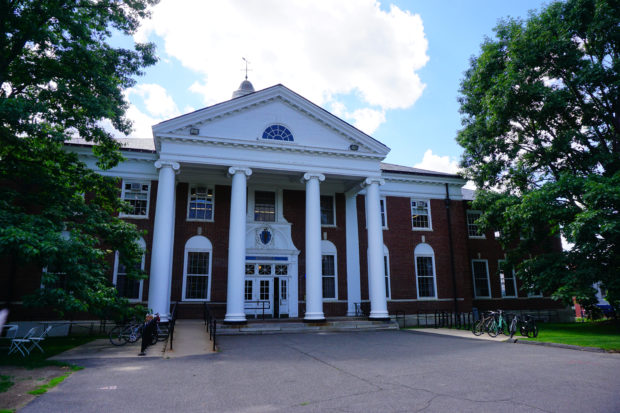 “The agency’s proposed definition would define sex as either male or female, unchangeable, and determined by the genitals that a person is born with, according to a draft reviewed by The Times,” the article continued. “Any dispute about one’s sex would have to be clarified using genetic testing.” (RELATED: 12-Year-Old Transgender Student Who Started Bathroom Saga At Oklahoma School Speaks Out)

The chancellor’s response described the proposed definition as “odious,” and claimed that it would result “in the elimination of protections for transgender individuals.”

According to a recent New York Times report, the U.S. Department of Health and Human Services (DHS) has proposed a reinterpretation of federal civil rights law that rescinds recognition and protection of transgender people. The Times report, which is based on a leaked internal memo, states that the move would define gender as a “biological, immutable condition determined by genitalia at birth.”

Although it appears that this proposed change to the enforcement of federal Title IX civil rights law is only at a preliminary stage, I want to take this opportunity to state unequivocally that we reject any reinterpretation of Title IX that results in the elimination of protections for transgender individuals, and we remain committed to fostering a campus climate that acknowledges the dignity of every member of our community. Furthermore, regardless of the outcome of this odious DHS proposal, we will continue to vigorously enforce our campus non-discrimination policy, which prohibits discrimination of any kind, including on the basis of gender identity and expression. 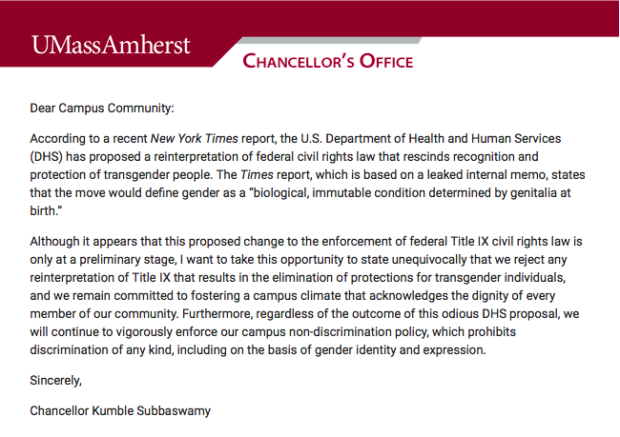 UMass Amherst has extensive policies about the rights of transgendered and non-binary individuals. According to a document detailing the school’s bathroom policy, students are told not to ask someone to leave a restroom based on their appearance.

“Please do not ask anyone to leave a restroom because their gender appears to you not to correspond to the gender of the restroom,” the document advises. “If you truly believe that someone is in the ‘wrong’ restroom, you can report the incident.”

“Non-binary individuals should use the restrooms in which they feel safer and most comfortable,” the document continues. “This may include gender-inclusive restrooms, when available, as well as gendered restrooms.” (RELATED: Transgender Actor Writes Open Letter To President Trump. Here’s What It Says)

Neither the university nor the chancellor responded to a request for comment by the time of publishing.