Exorcism of demonic spirits may seem like the stuff of Halloween horror movies, but outside of Hollywood film, lots of it is a reality to which Christian ministers bear witness year after year.

Major Christian denominations in the U.S., Ireland, and the U.K. have noted a “demonic crisis” in which the need for exorcisms has exceeded the number of available ministers to provide that service. Christian ministers attribute that surge in reported demonic activity to everything from the popularization of the use of witchcraft, to immigration waves from regions rife with animistic practices, to a growing brazenness of demonic forces in the faces of churches’ relative silence on the matter of spiritual warfare in recent decades.

Whatever the cause, the result is that ministers are reporting increasingly frequent confrontations with demonic spirits over the souls of suffering individuals.

Dr. Richard Gallagher And The Possession Of ‘Julia’

The Catholic Church often asks licensed psychiatrists to examine people who claim to be suffering from demonic possession or demonic harassment. Dr. Richard Gallagher, psychiatry professor at New York Medical College, faculty at Columbia University, and a board-certified psychiatrist, is one such person who the church has turned to many times for help in these cases.

Gallagher expressed skepticism when the church first asked for his help over 25 years ago, but that only affirmed to church officials that he was the right man for the job.

“Well, if we didn’t think you were skeptical, Dr. Gallagher, we wouldn’t have wanted to use you,” a priest told Gallagher, according to Yahoo.

Gallagher examined the woman in question, who claimed to suffer attacks from evil spirits, and discovered symptoms that shattered his skepticism. including the spontaneous appearance of bruises on her body.

“It didn’t seem to be explainable on the basis of any medical or psychiatric pathology,” he said. “She appeared to me to be completely sane. I had never seen a case like that before.”

He concluded that the woman was indeed attacked by demons. Gallagher says that cases like that woman are rare and that he spends the majority of his time convincing people who they are not in fact afflicted by the demonic. Still, Gallagher knows all too well the reality of the demonic, as exemplified in the extraordinary case of the woman known by the pseudonym “Julia,” documented in the March 2008 issue of the New Oxford Review. 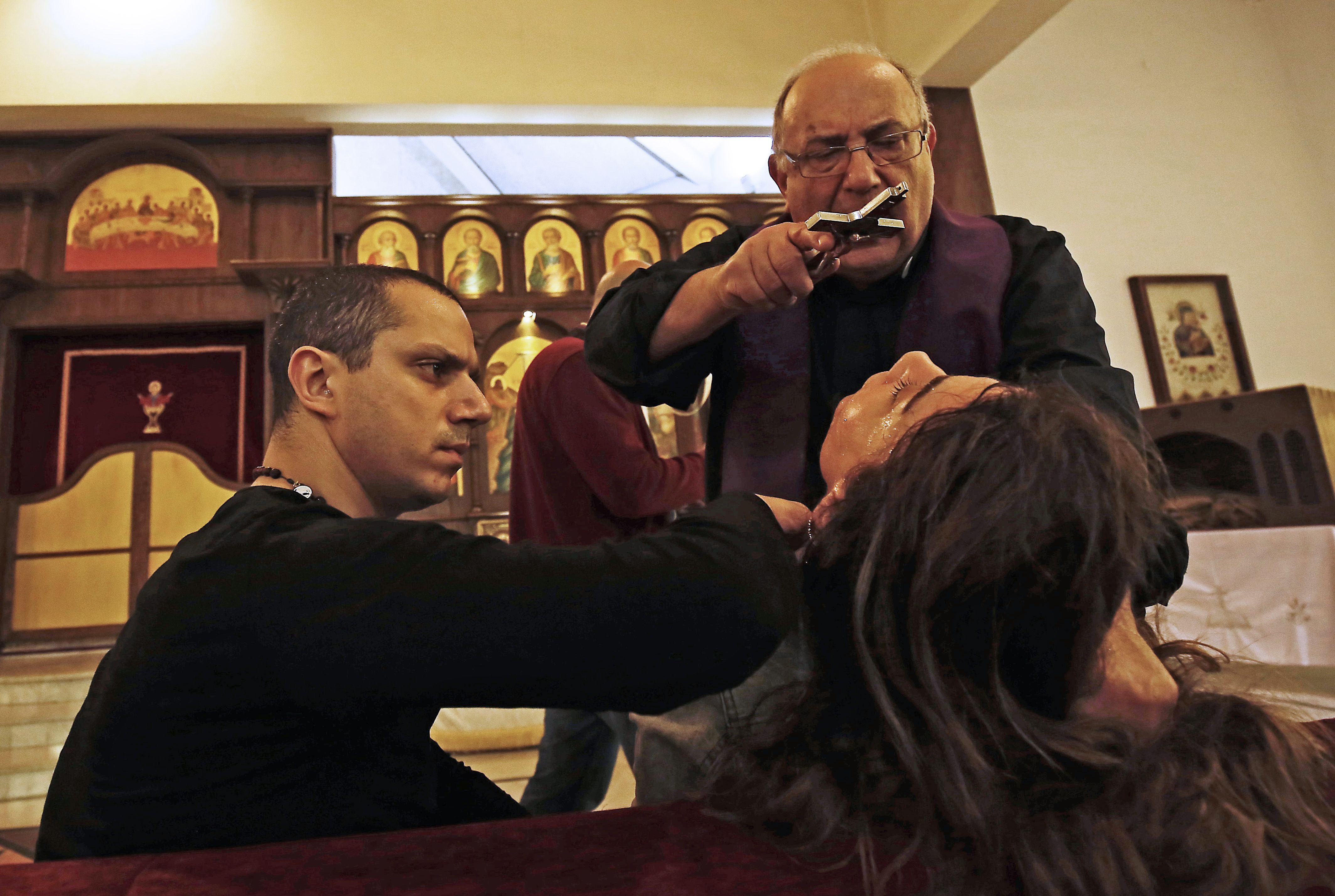 Father Elias Rahal, 68, performs exorcism ritual on a Lebanese lady at a church in the district of Mina in the northern port city of Tripoli on April 19, 2018. (IBRAHIM CHALHOUB/AFP/Getty Images)

Julia was the self-professed queen of a Satanic cult and believed that she had been demonically possessed. She reached out to a priest who referred her to Gallagher for a psychiatric examination. Not long into his examination, Gallagher said, Julia relieved him of any doubt he had about her claim.

Objects flew off the walls and shelves when she was in the room. She reportedly displayed knowledge of Gallagher’s personal life that she could not have known, spoke in ancient languages, and entered a trance state during which a demonic voice spoke through her. That voice allegedly interrupted a phone conversation between Gallagher and the priest Julia contacted when Julia was not present with either of them. Both men heard it.

“At one point, the voices spoke in foreign languages, including recognizable Latin and Spanish. (Julia herself only spoke English, as she later verified to us.) The voices were noticeably attacking in nature, and often insolent, blasphemous and highly scatological. They cursed and insulted the participants in the crudest way. They were frequently threatening—trying, it appeared, to fight back—’Leave her alone,’ ‘You’ll be sorry,’ and the like.

Julia also exhibited enormous strength. Despite the religious sisters and three others holding her down with all their might, they struggled to restrain her. Remarkably, for about 30 minutes, she actually levitated about half a foot in the air,” Gallagher wrote.

Clergy performed a total of eight exorcisms on Julia with Gallagher present. Unfortunately, she was never freed of the spirits assailing her.

“True possession can sometimes be taken care of in one exorcism but other times it can take years,” Gallagher said. “It can depend on the willingness of the victims to help themselves. The exorcism makes the demonic hold on the person weaker, but the person’s response also influences the outcome.”

“She was conflicted. She enjoyed some of the powers she had,” Gallagher added.

Perhaps the most widely-known exorcism is the case that served as the inspiration for William Peter Blatty’s novel “The Exorcist,” on which the film of the same name was based. 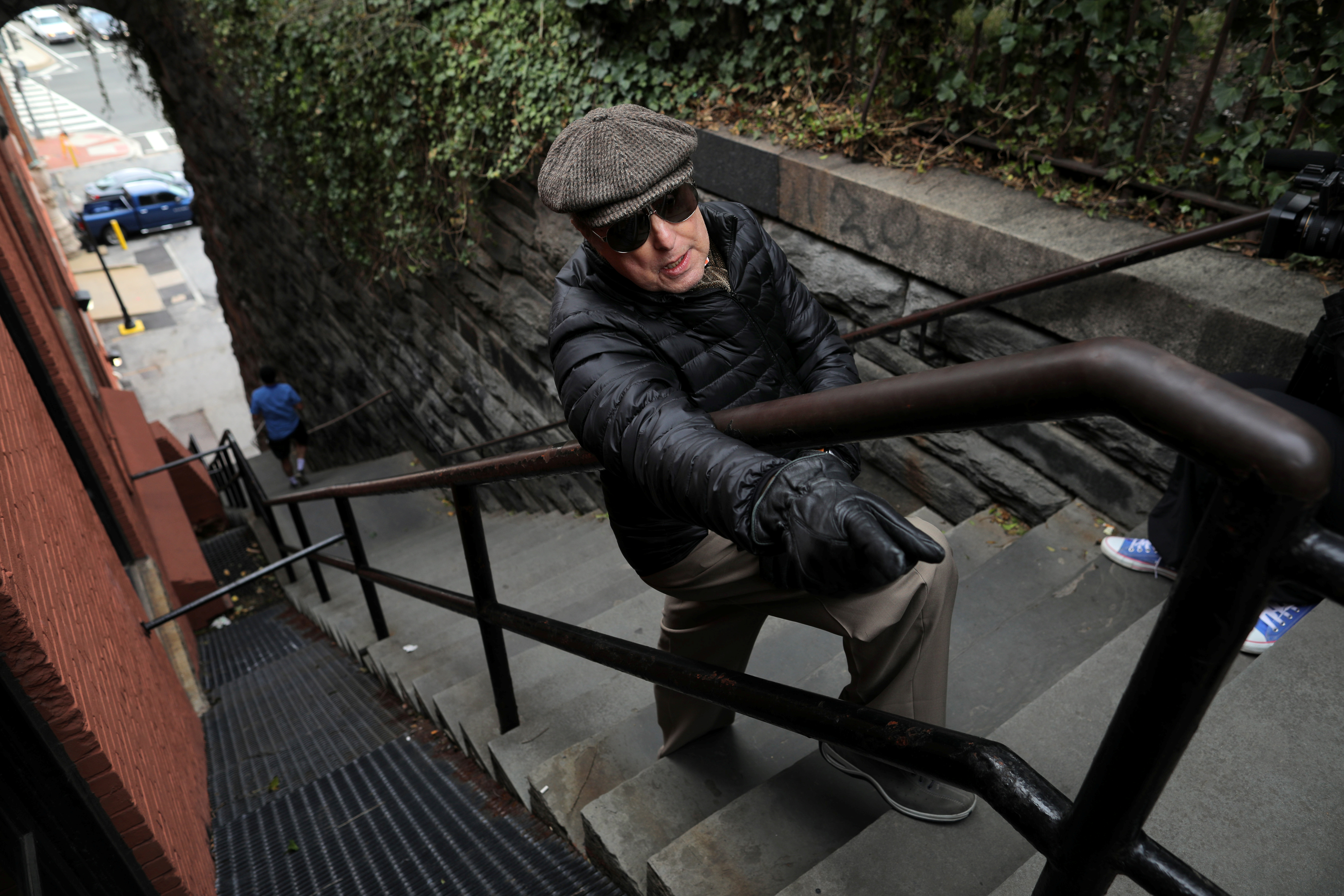 Director William Friedkin attends a walking tour around Georgetown that focused on some of the film locations from the original Exorcist in Washington D.C., U.S. April 17, 2018. REUTERS/Carlos Barria

The case involved a 14-year-old boy living in Maryland in the 1940s who reportedly became possessed after using a Ouija board to contact his recently deceased aunt. Instead of summoning his aunt, the boy later known by the aliases Roland Doe and Robbie Mannheim opened himself up to contact with a demonic spirit.

His family members and Lutheran priest afterward witnessed the disembodied sounds of heavy footsteps throughout the house, inanimate objects levitating and being thrown through the air, religious icons vibrating on the walls, and furniture being thrown over by unseen forces. The family’s Lutheran minister recommended that they take the boy to a Catholic priest.

They did so, and Roland underwent a series of over 30 exorcism sessions during which his bed shook, he spoke in an unnatural guttural voice, attacked priests, and allegedly exhibited spontaneous scratches on his skin that appeared to spell out messages or form demonic faces. The priests involved eventually drove the demon out of Roland, who reportedly had no memory of the exorcisms afterward.

Roland’s case was documented in a 1949 issue of The Washington Post, catching the eye of Blatty who would later use the story for his famous novel.

Skeptics and investigative journalists have cast doubt on the reports of Roland Doe’s possession, with some concluding that he was merely a disturbed boy. The truth will likely remain with those who witnessed the boy’s alleged deliverance.

Church Teachings On The Demonic

Confusion abounds in popular culture over what exorcism is and is not, despite publicized accounts of cases like Roland, Julia, and even the infamous 1928 exorcism of Anna Ecklund which her priest, Rev. Theophilus Riesinger, documented.

Interest in and demand for the ministry of exorcism have nevertheless spiked in recent years. 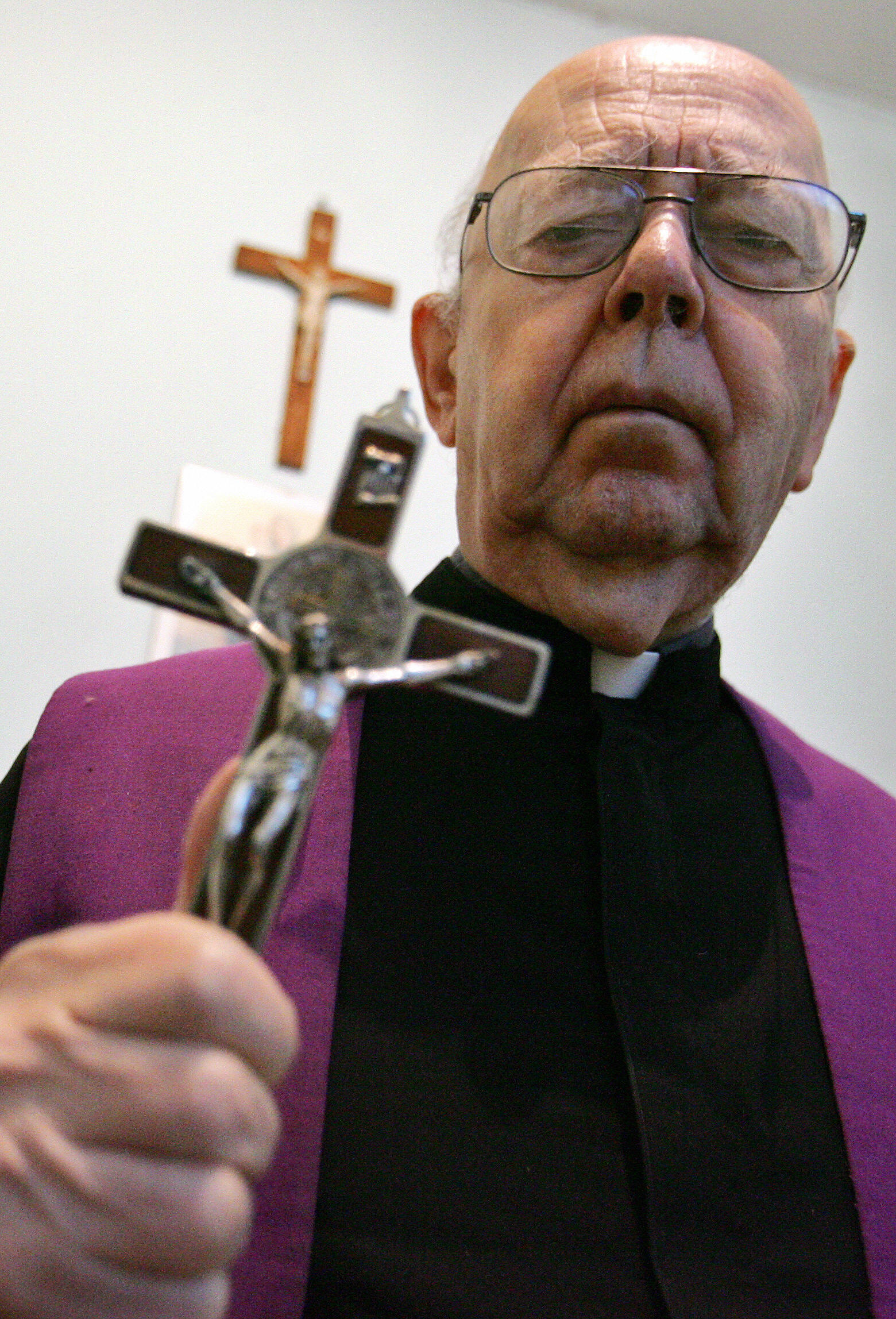 ROME, Vatican: Don Gabriele Amorth, an exorcist in the diocese of Rome and the president of honour of the Association of Exorcists poses, Oct. 10 2005 in Rome. For the second time a exorcism seminary will take place in Vatican city, Oct. 13 2005. (GIULIO NAPOLITANO/AFP/Getty Images)

What then exactly is exorcism, and why would someone seek it out?

Stylized depictions of exorcisms, also known as deliverance ministry, blur the line between fiction and the genuine teachings of Christian churches concerning this form of spiritual warfare. Each denomination has a somewhat different approach to the condition of possession, but basic beliefs shared among Christian orthodoxy assert that demons are fallen angels, which are inhuman spiritual entities, who follow Satan in rebellion against God and seek only to “kill, steal, and destroy” out of hatred for God and his creation.

A person who comes under the control of a demon, by witting or unwitting invitation of the demonic into their life, is considered to be possessed. Possessed persons can be freed, according to Christianity, if a minister drives the demon out of them by power of God in the authority of Jesus’ name. 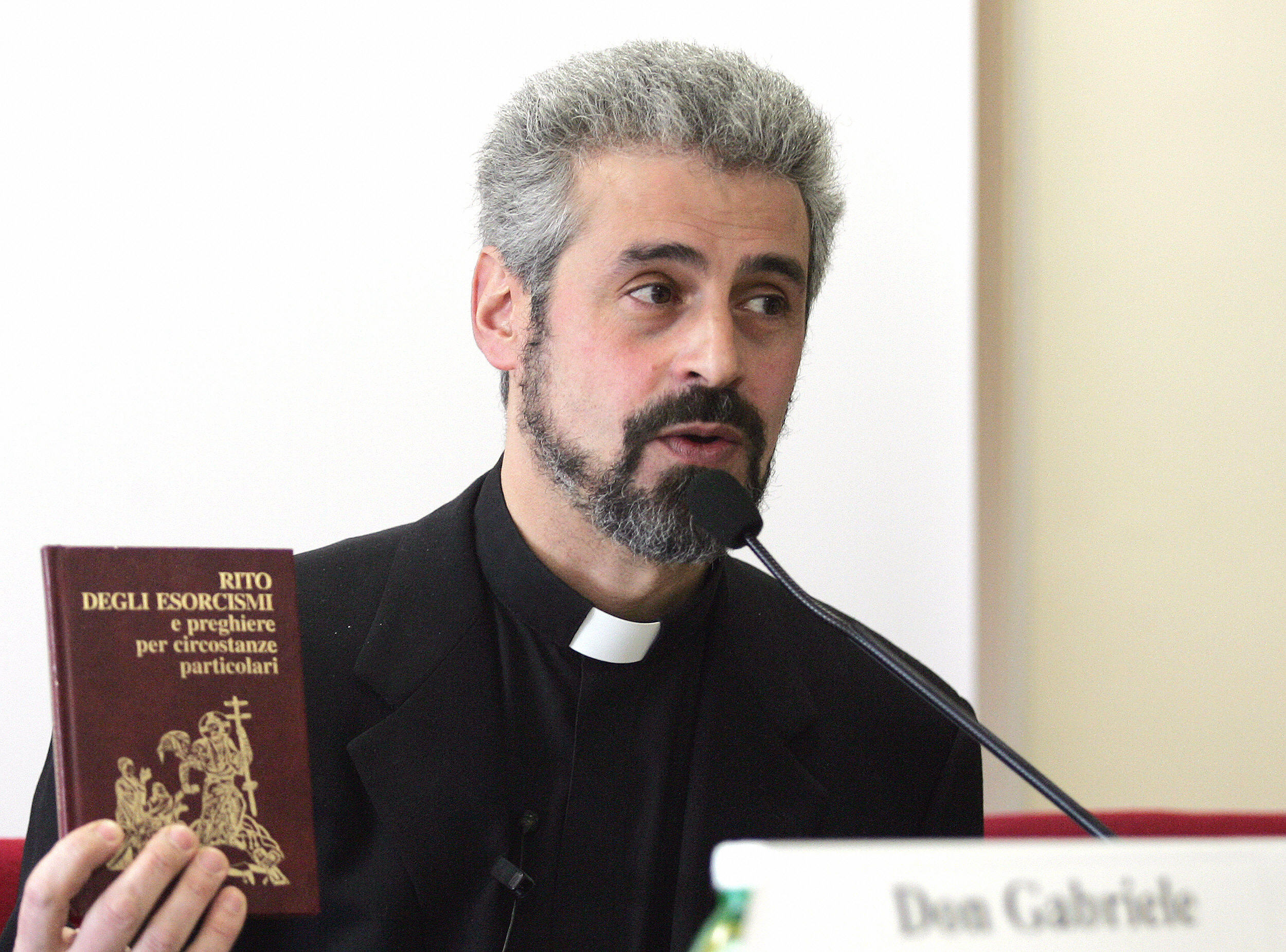 One major point of denominational contention is the definition of “minister,” as Catholics assert that only a priest may carry out an exorcism, while Protestants believe that all followers of Christ are called to be ministers of the Gospel and are therefore imbued with the necessary authority in Christ’s name to do so.

Exorcism is the process of driving out the evil spirit, and is typically used after the allegedly afflicted person has been subjected to a battery of medical examinations to ensure that they are suffering a spiritual malady as opposed to a sickness of physical or mental origin.

The Catechism of the Catholic Church, on the matter of exorcism, states:

When the Church asks publicly and authoritatively in the name of Jesus Christ that a person or object be protected against the power of the Evil One and withdrawn from his dominion, it is called exorcism. Jesus performed exorcisms and from him the Church has received the power and office of exorcizing.

In a simple form, exorcism is performed at the celebration of Baptism. The solemn exorcism, called “a major exorcism,” can be performed only by a priest and with the permission of the bishop. The priest must proceed with prudence, strictly observing the rules established by the Church. Exorcism is directed at the expulsion of demons or to the liberation from demonic possession through the spiritual authority which Jesus entrusted to his Church.

Illness, especially psychological illness, is a very different matter; treating this is the concern of medical science. Therefore, before an exorcism is performed, it is important to ascertain that one is dealing with the presence of the Evil One, and not an illness.

Should you feel harassed by a demonic presence, Catholics and Protestants both assert that a person can command it to leave them in Jesus’ name, provided that person has faith in Jesus. These prayers against the demonic from past church fathers, published online at Aleteia, exemplify the church’s practice of invoking the power of God in Jesus’ name to dispel what they assert are the spiritual forces of darkness.