“When a place gets so tribal that the two tribes won’t have anything to do with each other … that jealousy turns into hate,” Nelson stated, according to CNN. “And we saw what happened to the Hutus and the Tutsis in Rwanda, it turned into a genocide. A million-people hacked to death within a few months. And we have got to watch what’s happening here.”

According to United To End Genocide, approximately 800,000 Tutsis and Hutus were murdered during a “carefully organized program of genocide over 100 days.” 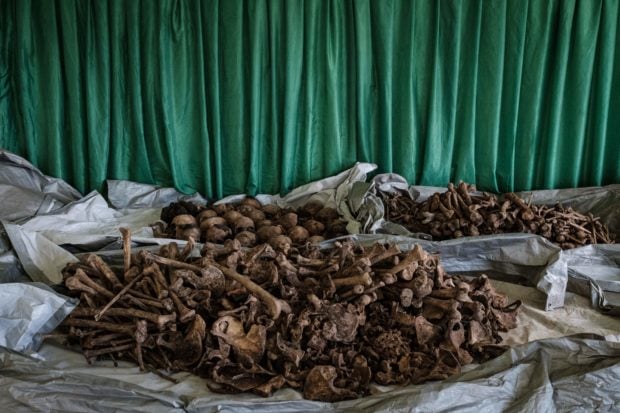 A picture taken on April 30, 2018, shows collected victims’ bones and skulls from a newly discovered pit which was used as mass grave during 1994 Rwandan genocide and hidden under a house at the local administration office in Kabuga, the outskirts of Kigali, Rwanda. (YASUYOSHI CHIBA/AFP/Getty Images)

A 2014 study reveals that slightly over one-fourth of Rwandan people suffer from post-traumatic stress syndrome as a result of the genocide.

Nelson’s comments came on the heels of a week of political violence in the country. On Friday, Cesar Sayoc Jr. was arrested for sending over a dozen pipe bombs to Democratic leaders. (RELATED: Pipe Bomb Suspect Arrested, Identified As Cesar Sayoc Jr.)

Then, a day later, a man walked into a Pittsburgh synagogue and killed eleven people.

Nelson is currently defending his Senate seat in a heated race against Florida’s Republican Governor Rick Scott. According to RealClearPolitics, they are currently separated by less than the margin of error.