Pope Francis claimed the Catholic Church is being persecuted by accusations — apparently alluding to claims of abuse and cover-up — again asserting that claims against the church are Satanic.

Francis made the comments at the end of the gathering of the synod of bishops, comprised of 250 bishops from around the world, at the Vatican on Saturday. He asserted Satan, “the Great Accuser,” was attacking the church through those who make accusations against the clergy. (RELATED: Vatican’s Deal With Communist China Spells ‘Annihilation’ For Chinese Church, Cardinal Zen Says)

Francis claimed the devil “in this moment is accusing us strongly, and this accusation becomes persecution,” in an effort to “soil the church.”

“This is the moment to defend our mother,” Francis said of the church, according to The Wall Street Journal. “The accuser is attacking our mother through us, and no one touches our mother.” 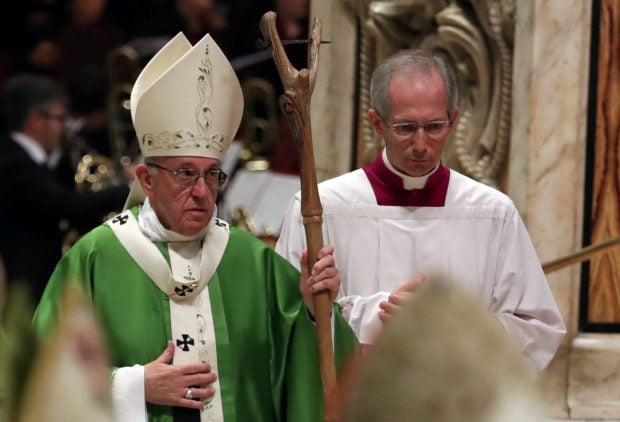 Pope Francis celebrates a closing mass at the end of the Synod of Bishops at the Vatican October 28, 2018. REUTERS/Tony Gentile

Francis’s attack on accusations will likely engender greater distrust from U.S. Catholics, regardless of Cardinal Marc Ouellet’s support, given the fact that their trust in the pontiff has fallen precipitously over his handling of the sexual abuse crisis.

The pontiff made similar accusations in the recent past, asserting that those who sow division in the church or who seek scandal by accusing clergy of abuse or of covering up abuse are doing the work of the devil. He also claimed that those who bring accusations against clergy operate out of a Satanic mindset, arguing that true followers of Christ should display only mercy and forgive those who have wronged them.

“Only the merciful resemble God the father. ‘Be merciful, just as your father is merciful.’ This is the path, the path that goes against the spirit of the world,” Francis said in September.

Francis initially told reporters that he would “not say a word” concerning the accusations and urged reporters to look at the facts and make up their own minds. He urged prayer and silence as an answer to those concerned about the scandal.

The pontiff appears, however, to have taken thinly veiled jabs at Vigano by calling such accusations satanically inspired attacks on the church.

Vigano has since published another letter accusing the pope of engineering a campaign of “subtle slander” in response to his claims, without actually denying them or providing evidence against them. The archbishop called on Ouellet to release documents that he said would prove his claims.

Ouellet refused to do so, however, and in a response similar to but more direct than Francis’s, he accused Vigano of blasphemy. Ouellet claimed Vigano’s accusations were nothing more than a political attack on Francis.