Her allegations came during the White House’s first press briefing since the man accused of sending pipe bombs to Democratic leaders was arrested and since another man reportedly shot and killed eleven people in a Pittsburgh synagogue.

“Sarah, the president said over the weekend that he could tone up his rhetoric. What does he mean by that? Does he have any concern at all that his words could inspire, provoke, trouble people to do awful things?” ABC News’ Jonathan Karl asked.

“Certainly the president wants in moments where our country is hurting like we’ve seen in the last several days, find ways to bring our country together. We’ve seen him do exactly that,” Sanders responded. “He has certainly I think found those moments to bring our country together and certainly focus on some of the things that all of us can support and all of us can condemn as well.” (RELATED: Tree Of Life Rabbi Doesn’t Blame Trump For Pittsburgh Shooting After CNN Presses [VIDEO])

“How does he do that when, in the case of the pipe bomber, this was somebody who went to Trump rallies? This is a man who had a van covered with attacks on the media and praise for the president,” Karl followed up. “On the shooter in Pittsburgh is somebody who was provoked, it seems, by the caravan the president has spent so much time talking about. When you say he’s trying to unite the country, why is he out there making these attacks?” 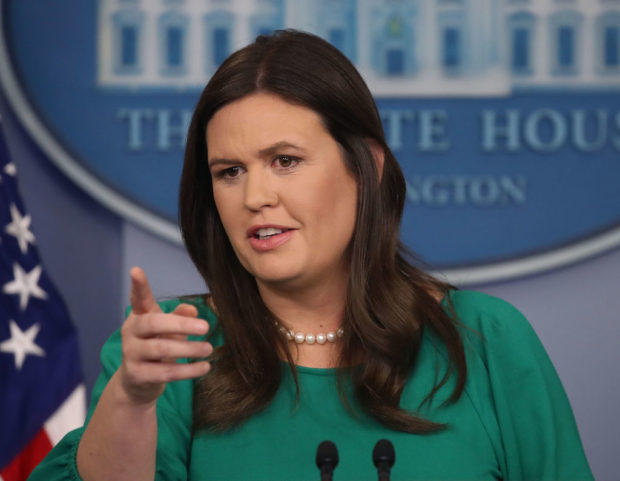 WASHINGTON, DC – OCTOBER 29: White House Press Secretary, Sarah Sanders speaks to the media during a briefing in the Brady Briefing Room at the White House on October 29, 2018 in Washington, DC. (Photo by Mark Wilson/Getty Images)