Left-wing billionaire Tom Steyer suggested on CNN Monday night that there is a difference between the man who shot up a congressional baseball practice and the man who allegedly sent pipe bombs to Democratic leaders.

“Do you blame the president’s rhetoric, at least in part, for the massacre here in Pittsburgh [and] the attempted bombings?” Anderson Cooper asked.

Steyer responded, “I believe that this president is lawless, I believe he’s corrupt. I believe he’s criminal. And I believe that his behavior and the behavior of the Republican Party in terms of their attitude towards our democracy and their disrespect for democratic norms and trying to prevent people from voting, that their behavior has ushered in an atmosphere of lawlessness and has given permission to people who feel as if there are no constraints anymore on decency and what is acceptable behavior.”

“Sarah Sanders mentioned the Congressional baseball shooting that occurred last year, Bernie Sanders supporter opened fire, gravely wounded Republican Congressman Steve Scalise of course,” Cooper follows up. “Sen. Sanders didn’t have a list of specific people he routinely vilified or mocked as the president does, but should Democrats? Is that example valid? Should Democrats bear some responsibility for the rhetoric at large?” (RELATED: Steyer: The Mail Bomber Is Partly Why Americans Should Vote Democrat In Midterms) 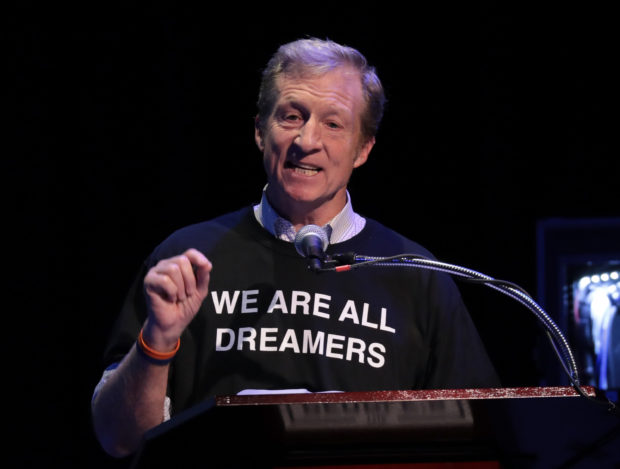 Tom Steyer speaks onstage at The People’s State Of The Union at Townhall on January 29, 2018 in New York City. (Photo by Cindy Ord/Getty Images for We Stand United)

“Anderson, I think what happened to Congressman Scalise is absolutely terrible. I think the person who did it was 100% wrong. I can’t imagine a democratic elected official doing anything but saying he was wrong and anyone that thinks about doing that is wrong and I think that’s the difference,” Steyer added. “I’m waiting for the president to come out and say that the people who are dealing in this kind of action are 100% wrong, that he doesn’t want them to support him, that he is looking for fairness and equity in American society.