Where does the concept of birthright citizenship come from?

In the U.S., birthright citizenship traces back to a clause in the 14th Amendment to the Constitution, passed just after the Civil War. The amendment’s citizenship clause states, “All persons born or naturalized in the United States, and subject to the jurisdiction thereof, are citizens of the United States.”

The clause itself is based on the legal concept of jus soli, or citizenship by “right of soil,” which contrasts with jus sanguinis, or citizenship by familial descent. It has been widely taken to apply to anyone born within U.S. territorial jurisdiction regardless of the immigration status of their parents, with the notable exception of foreign diplomats.

That unanswered question gives Trump room to argue the citizenship clause has been too widely interpreted, according to Johns Hopkins University professor Martha Jones, an expert on birthright citizenship.

“A narrowly tailored EO [executive order] that rested on the view that the children of unauthorized immigrants are not subject to the jurisdiction of the US (in citizenship terms) and thus not citizens by virtue of Birthright is an argument that can be made,” Jones wrote Tuesday on Twitter.

6/ A narrowly tailored EO that rested on the view that the children of unauthorized immigrants are not subject to the jurisdiction of the US (in citizenship terms) and thus not citizens by virtue of Birthright is an argument that can be made.

With his order, Trump aims to force the Supreme Court to update its interpretation of the citizenship clause by explicitly ruling on the question of whether the clause applies to children born to people in the U.S. without authorization.

What other countries have birthright citizenship?

Most countries in the world do not offer birthright citizenship — only 30 out of the world’s 194 nations automatically grant citizenship to children born to illegal immigrant parents, according to the Center for Immigration Studies.

The Western Hemisphere is a major exception — of the 30 countries that offer birthright citizenship, 29 are in North or South America. The U.S. and Canada are alone among developed nations worldwide that automatically grant citizenship to people born within their territorial jurisdiction.

Why do some immigration reformers want to end birthright citizenship?

Birthright citizenship has long been targeted by reformers who favor tighter immigration laws and lower levels of immigration overall. They argue that the practice encourages illegal immigration and benefit fraud by people who want to come to the U.S. for the express purpose of giving birth to an American citizen.

Between 2000 and 2008, an average of roughly 300,000 children were born to an illegal immigrant mother each year. That average has declined since the Great Recession, but there were about 275,000 babies were born to unauthorized immigrant parents in 2014, according to the Pew Research Center.

Because all of those children are U.S. citizens, they are eligible to eventually sponsor relatives for immigrant visas, creating a cycle of chain migration benefiting people who violated immigration law. Some reformers also argue that birthright citizenship promotes abuse of welfare programs because illegal immigrants can obtain benefits, including Medicaid, food stamps and certain tax credits, through their U.S. citizen children.

Then there is the issue of birth tourism, in which foreign nationals travel to the U.S. on business or tourist visas with the aim of giving birth to an American citizen. Estimates vary widely, but a 2015 CIS analysis found that more than 30,000 births to foreign “tourists” occur annually. Countries widely known for sending birth tourists to the U.S. include China, Russia and Mexico. (RELATED: Pregnant Russian Women Are Coming To America And Giving Birth To Anchor Babies)

“The growth of the birth tourism industry illustrates how the executive branch’s broad application of the Citizenship Clause can have the effect of transferring control over the nation’s immigration policy from the American people to foreigners,” Jon Feere, a former CIS fellow now working in the Trump administration, told Congress in 2015. 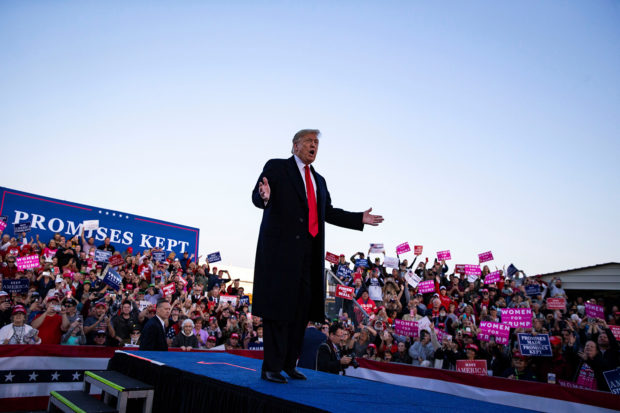 Can Trump end birthright citizenship without changing the Constitution?

If Trump does follow through on an executive order to change birthright citizenship, it would immediately be challenged by civil rights and immigration activist groups. The ensuing court battle would likely end up in the Supreme Court, where justices would have to weigh overturning more than a century of legal precedent with respect to the 14th Amendment’s citizenship clause.

In that case, it is far from certain the Supreme Court would rule the president has the constitutional authority to change a long-held legal interpretation of birthright citizenship via executive order. Trump’s two high court nominees, Neil Gorsuch and Brett Kavanaugh, are originalist jurists who favor a narrow reading of the text of the Constitution.

That means they are unlikely to sanction an effort by the executive to reinterpret the Constitution outside the plain meaning of the text of the 14th Amendment, according to Matthew Kolken, an immigration lawyer and member of the American Immigration Lawyers Association’s Board of Governors.

“There is ZERO chance either Gorsuch or Kavanaugh would find that a phone and a pen can abrogate the 14th Amendment,” Kolken wrote Tuesday on Twitter. “0.0 to be exact.”

There is ZERO chance either Gorsuch or Kavanaugh would find that a phone and a pen can abrogate the 14th Amendment. 0.0 to be exact. https://t.co/TBC8FuMyIe

Separately, Trump can pursue an end to birthright citizenship by prodding Republican allies in Congress to advance a bill mirroring his executive order. GOP Sen. Lindsey Graham of South Carolina said Tuesday he would introduce such a measure, calling birthright citizenship an “absurd” policy and a “magnet for illegal immigration.”

Even so, it’s not clear the Supreme Court would be any more amenable to a constitutional reinterpretation of the citizenship clause from Congress that it would from an executive order. As the Justice Department’s Office of Legal Counsel asserted in a 1995 opinion, which is still posted to the department’s website, “A bill that would deny citizenship to children born in the United States to certain classes of alien parents is unconstitutional on its face.”