President Donald Trump announced Tuesday morning he would issue an executive order that would end a right to citizenship for any child born in the United States to non-U.S. citizens, an issue that former Nevada Democratic Sen. Harry Reid once supported. (RELATED: Trump Will Attempt End To Birthright Citizenship)

As I wrote in The Washington Times just 8 years ago, South Carolina Republican Sen. Lindsey Graham also wanted to clarify and revise the current interpretation of the U.S. Constitution’s 14th Amendment, the citizenship/birthright clause. Legislation from the early 1990s that Reid once introduce did just that. 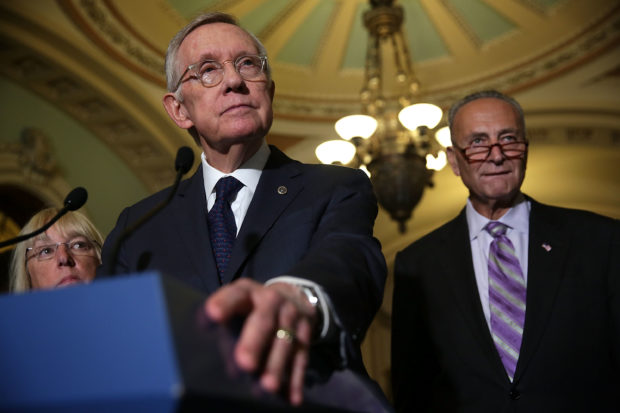 Reid introduced a bill at the time to the Sen. Judiciary Committee known as the Immigration Stabilization Act of 1993. But the legislation did not last long, as it was sent to the Subcommittee on Immigration and Refugee Affairs and died there.

The text of the legislation, however, supported termination of granting citizenship to children of non-citizens born in the United States. It read:

Reid later changed his position when he apologized about supporting such a stance in a December 1999 interview with the Las Vegas Review Journal.

Deportees wait to be processed at an immigration facility after a flight carrying illegal immigrants from the U.S. arrived in San Salvador, El Salvador, June 22, 2018. REUTERS/Jose Cabezas

“I believe if I had to list the mistakes I have made, that legislation would be way up high,’ Reid says now. ‘It was short-sighted. I didn’t understand the issue. I’m embarrassed that I made such a proposal,” Reid told The Review Journal at the time.

Six years prior, however, The Review Journal reported his legislation “slashed the limit of immigrants from 800,000 to 300,000 a year.” He told his hometown paper, “We’ve got too many immigrants, legal and illegal,” he said at the time.”

So why the apology from Reid in 1999? As I pointed out in a subsequent Washington Times piece in August 2010,  despite Reid’s later explanation about a “conversation” he had with his wife that changed his mind on the matter, what actually changed was the stance on immigration from the Nevada Senator’s biggest supporters—the unions.

According to a 2007 Congressional testimony by Center for Immigration Studies board member Cornell economist Vernon Briggs, the AFL-CIO started to reverse itself and began to go after critics of immigration reform — “especially critics of illegal immigration.” The union did this because it looked at illegal immigrants as potential members.

Briggs said in his testimony that the AFL-CIO’s new position on immigration started to become official by late 1999 through early 2000 and Reid’s “apology” through the Review-Journal about his previous stance on birthright citizenship came in December of 1999.