Using a series of striking visuals, the 1:25-minute ad juxtaposes a vision for America that consists of a strong economy and low unemployment rate with angry mobs and attacks on conservatives.

“JOBSNOTMOBS! VOTE REPUBLICAN NOW!!” Trump tweeted along with the clip.

“We have two choices on November 6,” reads the screen as the video begins with a vision for “The GOP’s America.” News clips from MSNBC and other networks show aspects of the economic boom of late, including low unemployment and growth in jobs and GDP. 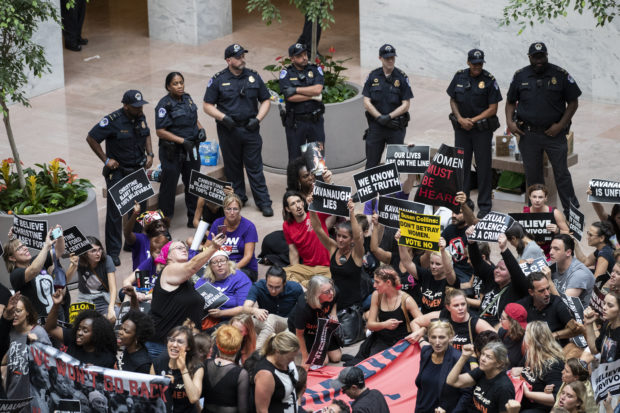 WASHINGTON, DC – OCTOBER 4: Protestors rally against Supreme Court nominee Judge Brett Kavanaugh in the atrium of the Hart Senate Office Building on Capitol Hill, October 4, 2018 in Washington, DC. Kavanaugh’s confirmation process was halted for less than a week so that FBI investigators could look into allegations by Dr. Christine Blasey Ford, a California professor who has accused Kavanaugh of sexually assaulting her during a party in 1982 when they were high school students in suburban Maryland. (Photo by Drew Angerer/Getty Images)

Then, after a quick video of Trump pumping his fist, the video switches to “the Left’s America,” which includes shots of Antifa, Maxine Waters, Eric Holder, and others.

“That’s when civility can start again,” says Hillary Clinton as the video ends with the words “Jobs not mobs.” (RELATED: Trump Campaign’s New Ad: We Can’t Go Back)