Graham said a midterm victory for the GOP is supported by the twin pillars of “Kavanaugh and the caravan,” referring to the concerted effort by Democrats to defeat Supreme Court Justice Brett Kavanaugh and the migrant caravan that threatens to bring illegals across America’s border. 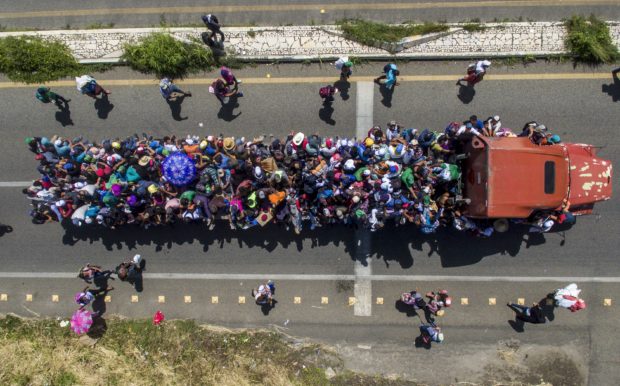 TOPSHOT – Aerial view of Honduran migrants onboard a truck as they take part in a caravan heading to the US, in the outskirts of Tapachula, on their way to Huixtla, Chiapas state, Mexico, on Oct. 22, 2018. (Photo credit: PEDRO PARDO/AFP/Getty Images)

Graham said Republicans are still reeling over how Kavanaugh was portrayed by Democrats, which he called “an assault on everything we hold near and dear.” (RELATED: Lindsey Graham Explodes On Senate Commitee Over Kavanaugh Hearing Process)

Graham also said that the results has been “a nightmare for red-state, Trump Democrats.”

Between the Kavanaugh debacle, despicable character assassination, and a caravan that’s trying to overrun our borders, it’s been a nightmare for Red State Democrats and its unified Republicans again — whether you’re a Bush Republican, a Trump Republican or a vegetarian Republican, you are upset over what they were doing to Brett Kavanaugh.

Graham also told Fox that remarks he made Monday night, warning Mexico that not stopping the caravan could imperil the U.S.-Mexico-Canada Trade Agreement, were acknowledged.

Graham said he received a call from Mexico’s ambassador to the United States during which the senator told him, “You need to stop this caravan … keep working with Trump …”