The president of the National Border Patrol Council sat down with the Daily Caller to talk about immigration policy and the migrant caravan making its way toward the U.S.-Mexico border. (RELATED: Liz Warren Says Migrants In U.S.-Bound Caravan Need To Enter Legally — ‘Follow Those Laws’)

Brandon Judd, who also served as a border patrol agent for over 20 years, says there are loopholes that migrants are taking advantage of to get into the United States and stay in.

“They’re coming here, breaking our laws and knowingly doing it. Groups like Pueblo Sin Fronteras are encouraging them to break our laws, ” he said.

Judd also went on to say that the United States needs Trump’s proposed border wall in strategic areas along the U.S.-Mexico border to protect U.S. citizens. 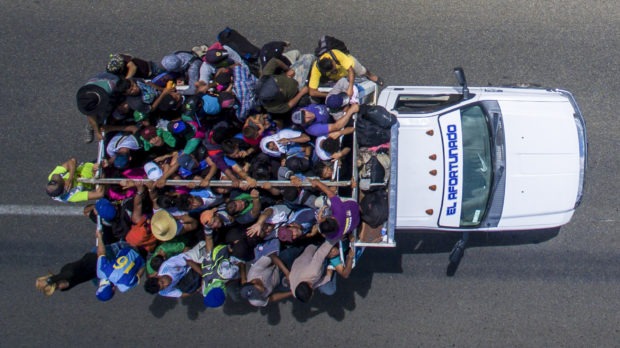 Aerial view of Honduran migrants onboard a truck as they take part in a caravan heading to the US, in the outskirts of Tapachula, on their way to Huixtla, Chiapas state, Mexico, on October 22, 2018. – President Donald Trump on Monday called the migrant caravan heading toward the US-Mexico border a national emergency, saying he has alerted the US border patrol and military. (Photo by PEDRO PARDO / AFP) (Photo credit should read PEDRO PARDO/AFP/Getty Images)

NOW CHECK OUT The Daily Caller’s most popular shows:

Would You Rather Date A Trump Supporter or MS-13 Gang Member?

New Details About The ‘Muslim Extremist’ Compound In New Mexico