Urban Meyer explained his health problems in a recent interview, and it might cause some Ohio State football fans to smash the panic button.

The Buckeyes coach is suffering from enlarged congenital arachnoid cyst, according to comments made from Dr. Andrew Thomas to Yahoo Sports. The cyst has led to “aggressive headaches.”

Over the last few years, I’ve felt better and, with the help of my doctors, learned to manage it and monitor it with medication. I’m optimistic that this time won’t be any different … I just want people to know what’s going on. I’ve been dealing with this for several years.

For those who might have been living under a rock for the past decade, Meyer left Florida after a successful stint due to apparent health problems. Those health problems apparently weren’t enough to stop him from accepting the OSU job.

If I’m an OSU fan, I’d be smashing the panic button right now. He might have said he has no plans of leaving the Buckeyes, but it’s time to start looking for a fire after you see smoke. That’s simply the way life works. (RELATED: Urban Meyer Reveals If He Plans To Continue Coaching At Ohio State) 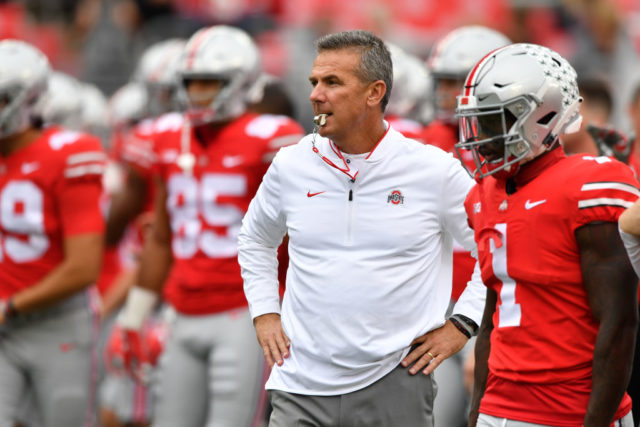 COLUMBUS, OH – SEPTEMBER 22: Head Coach Urban Meyer of the Ohio State Buckeyes watches as his team warms up before a game against the Tulane Green Wave at Ohio Stadium on September 22, 2018 in Columbus, Ohio. (Photo by Jamie Sabau/Getty Images)

I have no idea what the resolution on this whole situation is, but I wouldn’t be the least bit surprised if he left. Not one bit. After his suspension following the Zach Smith debacle, it just seems like Meyer has one foot out the door.

Fans of the Buckeyes better hope like hell I’m wrong because they won’t get a coach of his caliber to replace him.