Florida’s Democratic gubernatorial nominee Andrew Gillum spoke at an event hosted by an anti-Israel organization the day after the deadliest attack on Jews in American history.

Gillum and his running mate, Chris King, spoke at a “Muslims for Gillum” rally Sunday at Apna Bazar in Orlando, Florida. The event was co-hosted by Emgage, an American Muslim lobbying organization. Only a day earlier on the Jewish Sabbath, 11 people perished in the Tree of Life synagogue in Pittsburgh after an individual carried out a mass shooting while reportedly shouting, “All Jews must die.”

Emgage has been a vocal supporter of Gillum, the mayor of Tallahassee, and repeatedly endorsed his candidacy for governor of Florida. (RELATED: Andrew Gillum Compares Trump And DeSantis To Pigs) 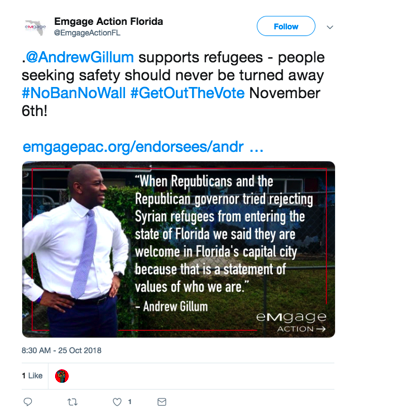 Florida’s Democratic gubernatorial nominee Andrew Gillum spoke at an event hosted by an anti-Jewish organization the day after the deadliest attack on Jews in American history. (Image: Screenshot/Twitter) 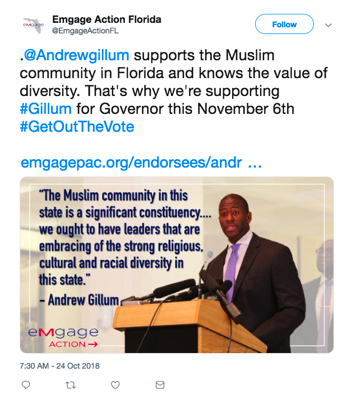 The co-chair of Emgage, Khurrum Wahid, has an extensive history of defending individuals that the United States government has tied to Islamic terrorism. Walid was the defense attorney for Rafiq Sabir, who was sentenced to a 25-year prison term for conspiring with al-Qaeda by providing material support and medical care to injured militants. Hafiz Kahn, who was found guilty of conspiracy and providing material support to terrorists by sending $50,000 to the Taliban in order to kill American troops overseas, was also represented by Wahid. And most notably, Wahid defended Ahmed Omar Abu Ali who received a life sentence for joining al-Qaeda and plotting to assassinate former President George W. Bush.

Gillum has attended and spoken at events hosted by Emgage in the past. Gillum spoke in 2016 at the annual Muslim Day event, which Emgage organized in partnership with the Hamas-linked Council on American-Islamic Relations (CAIR). Interestingly, Walid previously served as CAIR’s legal adviser.

Two years later, representatives from CAIR met with Florida state Rep. Frank White, a Republican, to discuss legislation where they referred to Israel as a “terrorist state.” The legislation they were opposing was an appropriations bill to provide security for Jewish day schools. State Rep. Randy Fine, the only Jewish Republican in the Florida legislature, proposed the bill — he confirmed to The Daily Caller News Foundation that CAIR and Emgage actively lobbied against it.

“With a 57 percent increase in anti-Semitic incidents and the proliferation of gun violence, as we just witnessed in Parkland, this funding will provide much needed upgrades to Jewish and all nonpublic schools at risk,” Mimi Jankovits, executive director of Teach Florida, said at the time in March.

“As the mayor of Tallahassee, I made it my business to make sure that we went and visited the student mosque at FSU,” Gillum said.” During Muslim Day at the capitol, I was proud to offer a word of welcome to Muslims who had come from across the state of Florida to speak with the Florida legislature so that the legislature could understand that this is an important constituency here in our state.”

Gillum has faced backlash in the past for his ties to the anti-Zionist organization Dream Defenders, which accuses Israel of “ethnically cleansing over 750,000 Palestinians” and “routinely [developing] its latest military weaponry by attacking the civilian population of Gaza.”

Gillum is leading his Republican challenger, former Rep. Ron DeSantis, by an average of 2.7 points, according to RealClearPolitics.