The 911 operator who responded to the call from Tree of Life’s rabbi during the shooting has been hailed for saving the rabbi from the murderous rampage.

Allegheny County 911 operator Bruce Carlton gave instructions to Rabbi Jeffrey Myers as a gunman allegedly slew 11 people in Myers’s synagogue and reportedly kept the rabbi alive. Gunshots and screams could be heard in the background as Carlton tried to keep Myers away from the gunman, according to Carlton. It was the first call that left the responder physically shaken. (RELATED: Rabbis Gather Every Bodily Trace Of Shooting Victims From Synagogue For Sacred Burial Rite) 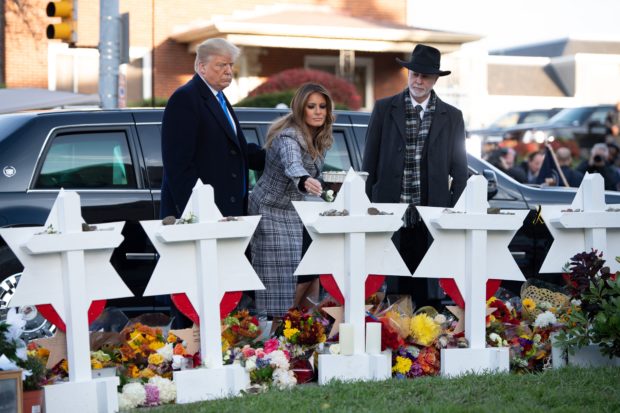 US President Donald Trump and First Lady Melania Trump, alongside Rabbi Jeffrey Myers, place stones and flowers on a memorial as they pay their respects at the Tree of Life Synagogue in Pittsburgh, Pennsylvania, October 30, 2018. – Scores of protesters took to the streets of Pittsburgh to denounce a visit by US President Donald Trump in the wake of a mass shooting at a synagogue that left 11 people dead. Demonstrators gathered near the Tree of Life synagogue, where the shooting took place, holding signs that read “President Hate, Leave Our State!” and “Trump, Renounce White Nationalism Now.” (SAUL LOEB/AFP/Getty Images)

“It all seemed so surreal like it wasn’t happening. Time seemed to speed up, time seemed to slow down. Maybe after I disconnected with the rabbi and I was able to fully digest what I was reading because I was trying to keep the rabbi on the phone. One, for his safety and two, for officers’ safety.

“It was the first time I was shaken. I hung up the phone with the rabbi whenever I confirmed he was safe and I was shaking physically for a few minutes,” Carlton added.

Robert Bowers, 46, is accused of carrying out the shooting. Bowers was indicted on 44 counts connected to the shooting, and he potentially faces either the death penalty or a lifetime behind bars.