Texas Rep. Louie Gohmert fired back at those who accuse him and others of anti-Semitism for criticizing liberal billionaire financier George Soros.

At the end of a segment on Wednesday night’s “Lou Dobbs Tonight,” Gohmert said, “It’s not anti-Semitic to criticize Soros, and Israel issued a statement a year ago saying just that.”

At end of segment as Lou Dobbs is heading to break, Louie Gohmert blurts out that “it isn’t anti-Semitic to criticize Soros and Israel issued a statement a year ago saying just that!”

Gohmert’s televised comments came less than a week after Judicial Watch’s Chris Farrell was banned from Fox-affiliated networks after accusing the “Soros-occupied State Department” of funding the caravan of migrants on its way through Mexico to the United States, a claim that the Texas congressman himself has echoed. 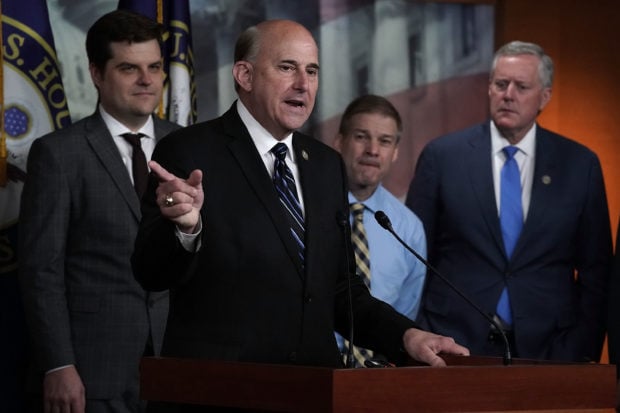 WASHINGTON, DC – MAY 22: U.S. Rep. Louie Gohmert (R-TX) speaks as Rep. Mark Meadows (R-NC) (R), Rep. Jim Jordan (R-OH) (2nd R), and Rep. Matt Gaetz (R-FL) (L) listen during a news conference May 22, 2018 on Capitol Hill in Washington, DC. Rep. Zeldin will introduce with at least 16 other House Republicans a resolution to call for the appointment of a second special counsel to investigate the Òmisconduct at highest level of Department of Justice and the FBI.Ó (Photo by Alex Wong/Getty Images)

The left has made a concerted attempt to link any criticism of the billionaire financier with anti-Semitism. In an article titled, “‘Dripping with poison of antisemitism’: the demonization of George Soros,” The Guardian’s Jason Wilson makes his case:

From the racist white nationalist site the Daily Stormer to major conservative media stars, the right has been increasingly united over the last decade in seeing the hidden hand of Soros, whom they frequently describe as a “globalist”, in all manner of events.

He has been falsely accused by the right of orchestrating alleged violence from so-called “antifa” groups, manipulating the world economy, being a wartime Nazi collaborator and sponsoring the entirely fictional project of “white genocide.”

As does Democratic Rep. Adam Schiff, who told CNN’s Jake Tapper on Sunday that attempts to link Soros to the caravan is akin to a “blood libel” against Jews. (RELATED: Joe Scarborough Likens Migrant Caravan To ‘Gypsies And Jews’ Who Were Persecuted By The Nazis)

In a statement to The Daily Caller, Rep. Gohmert doubled-down on his criticism of Soros:

“The alt-left media, including the New York Times, has decided to provide an all out defense of their beloved, self-identified and remorseless former Nazi collaborator of Jewish lineage, who even the Israeli government knows well is not their friend. George Soros, an anti-God, anti-Israel billionaire, is perhaps the largest ever global funder of efforts to undermine America’s Constitution. Anyone who puts this much effort into the destabilization of America and the destruction of Israel deserves to be called out for his actions.”

The Texas congressman also included a link to a statement from Israel’s Ministry of Foreign Affairs that essentially accused the billionaire financier of undermining “Israel’s democratically elected governments by funding organizations that defame the Jewish state and seek to deny it the right to defend itself.” 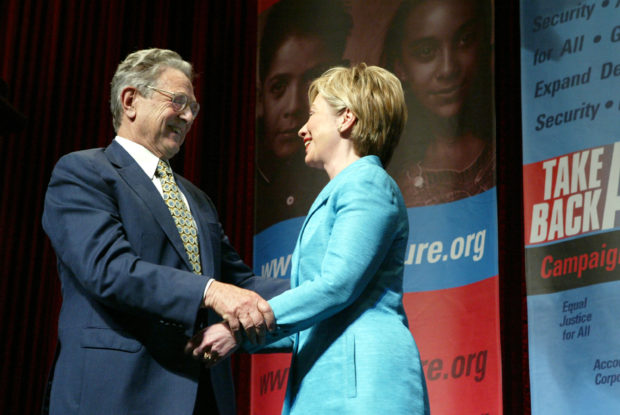 WASHINGTON – JUNE 3: Philanthropist George Soros (L) greets U.S. Senator Hillary Clinton (D-NY) after she introduced him at the Take Back America Conference June 3, 2004 in Washington, DC. The conference aims to unite progressive issue groups as well as train for organizing campaigns in 2004 and beyond. (Photo by Matthew Cavanaugh/Getty Images)

Finally, Free Beacon’s David Rutz wondered why the left has banned criticism of Soros, yet allow and encourage criticism of right-wing financiers like Sheldon Adelson.

MSNBC anchor Stephanie Ruhle smirked at the camera and surmised Trump exited the Iran nuclear deal to “please Sheldon Adelson,” and then-Comedy Central host Stephen Colbert once joked about Scott Walker wanting the “blessing and fortune of Sheldon Adelson, but they’re not greedy. They’ll settle for just the fortune.”

Tom Steyer, another Democratic megadonor whose father was Jewish, recently said Adelson’s transfer of millions to the Republican National Committee was directly tied to the Trump administration’s move of the U.S. embassy in Israel to Jerusalem and decision to exit the Iran nuclear deal.