Senator Sherrod Brown is facing two different allegations of assault, both of which date back to the 1980s, and he has refuted both claims.

Brown and his ex-wife, Larke Recchie, went through a messy divorce in 1986. Around the time of the divorce filing, Recchie asked for and received a restraining order because she was “in fear for the safety and well-being of myself and our children due to (Brown’s) physical violence and abusive nature,” according to an affidavit.

In a follow-up affidavit, Recchie alleged that when Brown went to pick up their children he refused to wait outside as she asked. She alleged that he “pushed me up against the wall with his arms in order to pass and enter the house,” and that “he refused to leave when asked and began to say insulting, derogatory things about me, my mothering of my children and my character in front of my friends and children.”

Despite these allegations, Brown’s ex-wife has recently described her allegations as simply “angry words” that were a part of an “unfriendly divorce.”

More recently, his Republican challenger Jim Renacci revealed to the Cincinnati Enquirer’s editorial board that “multiple women” have come forward to him alleging Brown assaulted them. Renacci also told them that he referred those women to a lawyer who has experience with victims of domestic and sexual abuse.

That lawyer is Laura Mills, who is also Renacci’s lawyer, and she donated to his campaign as recently as July.

About two weeks ago, Mills released a statement identifying herself as the lawyer Renacci directed those women to for help. In her statement, she referred to the woman who came forward to her as “a very credible source and a professional woman.”

In the statement, Mills described the allegation her client told her:

She described an unexpected, uninvited, unwanted, and sudden advance, roughly pushing her up against a wall. It did stop after she expressed dismay and very firmly pulled away, explaining that was not her style nor why she was there. He then said he remembered what she had on the day they had met some time earlier and that he had been attracted to her. Although she was able to defuse the situation, it did shake her up and she told friends about it as soon as she got home.”

The same day she released her statement, Brown’s lawyer sent a cease and desist letter to Renacci.

The letter demanded Renacci immediately stop making comment on the matter because they are “libelous and defamatory claims.”

Sen. Brown campaign spokesman Preston Maddock told Cleveland.com, “Pure and simple this is character assassination by a failed and desperate candidate who every day reaches new lows. This will not be tolerated, all legal means will be pursued against Jim Renacci.” 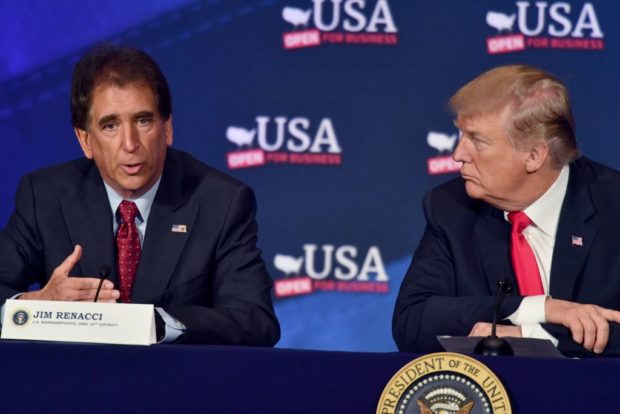 US President Donald Trump listens to US Representative Jim Renacci (L) during a roundtable discussion on the new tax law at the Cleveland Public Auditorium and Conference Center on May 5, 2018, in Cleveland, Ohio. (NICHOLAS KAMM/AFP/Getty Images)

An Ohio based PAC called #MeTooOhio, based on the #MeToo movement, released an ad in September condemning Brown and demanding he resign from his seat in the Senate.

The organization’s communications advisor told The Daily Caller, “The court-documented abuse allegations against Senator Brown by his ex-wife alone are disturbing and should be disqualifying. Now we hear of another woman, with a chilling account, who says Sen. Brown was abusive to her as well. We have heard from other women who have similar stories; however, they are hesitant to come forward at this time.”

A new poll released by Emerson on Wednesday shows Renacci is catching up to Brown with the election less than a week away. Brown’s lead has dwindled down to six points, 49 percent to 43 percent, with eight percent still undecided.