The Trudeau government recently started deporting a lot more illegals coming into Canada from the United States. With a federal election due in less than a year, the Liberals appear to be taking action on a policy matter that has been the subject of growing public criticism.

According to an email sent from the Canadian Border Security Agency (CBSA) to Reuters, the border patrol has been told to regard illegal border crossers from the United States the same way it regards known criminals who try to enter Canada. That could lead to three times as many border crossers being deported in 2018 than in the previous year, Reuters reports.

This new approach to immigration is a radical change from Canada’s policy of only a month ago when the Official Opposition Conservatives revealed how few illegals from the United States had actually been deported. (RELATED: Canada Has Deported Only 398 Of 32,000 Illegal Border-Crossers)

As an anonymous source within the CBSA contends, that is creating problems for national security.

“We have priority cases, people with extensive criminal records that are due to be deported, people with security problems – these cases are not all taken care of because we have to take care of these administrative cases,”  the officer told Reuters, adding that border-crossers “are not a priority, but they are a priority because of all the media attention around them.” (RELATED: Trudeau’s Border Control Plan: Put Illegals Into Hotels)

Since Canadian Prime Minister Justin Trudeau issued his now infamous tweet that welcomed the refugees of the world, over 36,000 people have illegally entered Canada from the United States — the vast majority from an isolated border crossing in upstate New York, where locals actually help the illegals get into Canada.

I would prefer that we stopped the abuse of Canada’s humanitarian immigration system by closing the loophole in the Safe Third Country Agreement. People are not fleeing persecution from upstate New York. These are not the world’s most vulnerable. https://t.co/hLH6zkbEsd 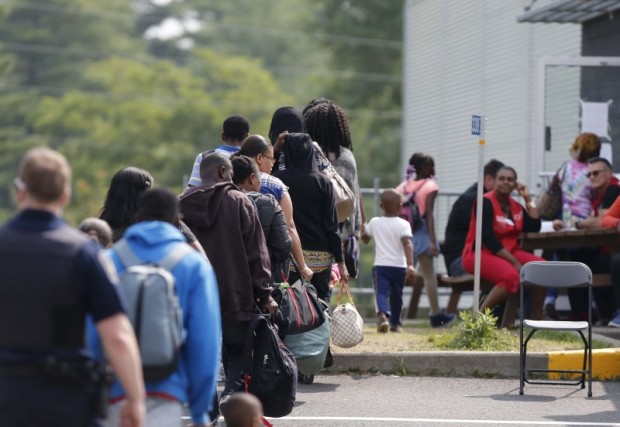 FILE PHOTO: A group of asylum seekers wait to be processed after being escorted from their tent encampment to the Canada Border Services in Lacolle, Quebec, Canada Aug. 11, 2017. REUTERS/Christinne Muschi

In response to the escalating border crisis, Trudeau even created a new cabinet ministry last summer, dubbed the Ministry Of Border Security and Organized Crime Reduction, and put former Toronto police chief Bill Blair in charge of it. But critics, including Official Opposition Conservative Immigration Critic Michelle Rempel, call Blair the “minister of nothing” because there are no national security organizations reporting to his department.