British police are investigating hundreds of suspects connected to notorious sex grooming rings in Rotherham, England, authorities said Wednesday, after seven of the members were convicted on rape and false imprisonment charges in October.

The investigation, dubbed Operation Stovewood, has so far identified 151 “designated suspects” and as many as 275 others whose identities have not been confirmed, The Independent reported, citing Britain’s National Crime Agency.

Police described the case as “unprecedented in its scale and complexity” because of the sheer number of suspects and victims, and because in many cases the alleged sexual abuse dates back over 20 years. Thus far, a total of 24 suspects have been charged, 12 of whom have been arrested and released on bail, police said.

Operation Stovewood was initiated in 2014 to investigate allegations of rampant sexual abuse of local girls by gangs of mostly south Asian men in Rotherham. The investigation, which covers a period from 1997 to 2013, has identified more than 1,500 victims of child sexual exploitation.

The case has garnered international attention and sparked controversy in Britain due to the ethnic and class dynamics involved. Critics of the government’s response have accused authorities of turning a blind eye to the grooming gangs out of indifference to the mostly working-class victims. They also claim authorities downplayed the scale of abuse due to fears of being accused of racism or religious bias against the mostly Pakistani gang members.

An outside assessment of authorities’ response to the Rotherham allegations found those criticisms have merit. Authorities were slow to confront the grooming gangs because of “nervousness about identifying the ethnic origins of perpetrators for fear of being thought as racist; others remembered clear direction from their managers not to do so,” according to the Jay Report, an independent inquiry into the Rotherham case. (RELATED: BBC Silences Discussion Of Islamic Terrorism And Rape Of Young Girls) 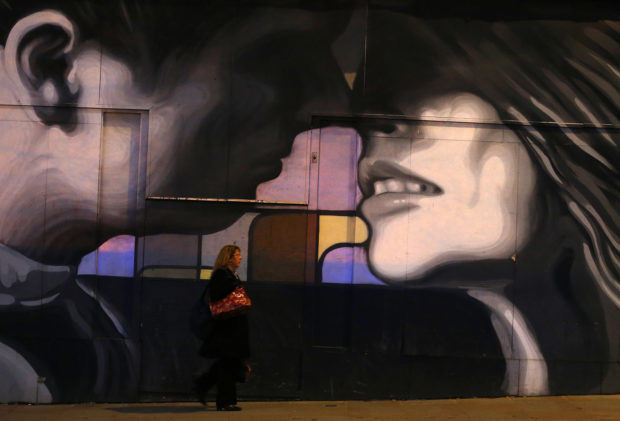 A woman walks past a boarded shop in Rotherham, northern England, February 4, 2015. Rotherham’s council leader and entire cabinet resigned after the publication of a report into their response to years of child sexual exploitation in the town. The report said the authority was not fit for purpose and had been in complete denial after an earlier inquiry found that 1400 children, some as young as 11, were abused in Rotherham, by gangs of predominantly Asian men. REUTERS/Darren Staples

An eighth defendant, who cannot be named for legal reasons, was convicted of two rapes.

Investigations into similar child exploitation rings are ongoing in other British cities. The largest is in Telford, where authorities believe as many as 1,000 girls have been sexually abused by grooming gangs since the 1980s.

U.K. Home Secretary Sajid Javid has initiated a probe into the “cultural drivers” behind the grooming gangs.

“There will be no no-go areas of inquiry,” Javid said in September, according to the Independent. “I will not let cultural or political sensitivities get in the way of understanding the problem and doing something about it.”