A protester confronted Democratic New Jersey Sen. Cory Booker on Friday about a groping incident the congressman wrote about in college.

Booker was in North Dakota on Friday campaigning for Democratic Sen. Heidi Heitkamp, who is running for re-election against Republican candidate Kevin Cramer.

As Booker exited a get-out-the-vote rally for Heitkamp, a protester repeatedly yelled at him about the groping incident.

“Hey Cory, did you tell ’em about your sexual assault?” the man shouted several times.

Booker seemed to have heard the man at one point as he was taking a selfie with a supporter, and shot a look in the protester’s direction. 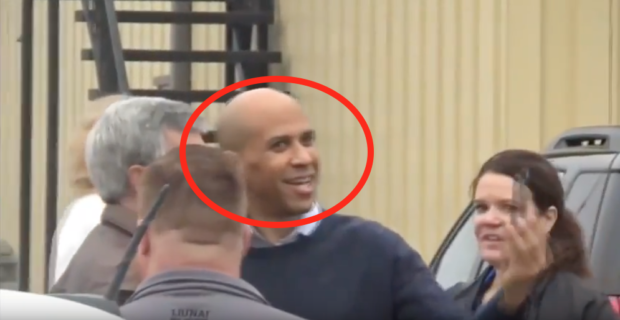 Booker wrote in his college paper, the Stanford Daily, that he once groped a girl when he was 15 years old.

In the article, titled “So Much For Stealing Second,” Booker wrote, “As we fumbled upon the bed, I remember debating my next ‘move’ as if it were a chess game. With the ‘Top Gun’ slogan ringing in my head, I slowly reached for her breast. After having my hand pushed away once, I reached my ‘mark.'”

Booker explained that the incident haunted him and proved that there was “a gap between my beliefs and my actions” involving his relationships with women.

The column resurfaced during the hearings for Supreme Court nominee Brett Kavanaugh, as critics noted a level of hypocrisy in Booker’s attacks on Kavanaugh over sexual assault allegations.

Paul Munshine, a columnist for The Star-Ledger, said, “But based on that Stanford Daily column, Booker should be giving Kavanaugh the benefit of the doubt as well. The point of it was that the future senator had ‘a wake-up call’ and decided ‘I will never be the same.'”